Peninsula Movie Review: Decent and Pacy Zombie Thriller but No ‘Train to Busan’ This One! (LatestLY Exclusive)

Peninsula is a standalone sequel to Yeon Sang-ho's 2016 Korean horror-thriller Train to Busan. The movie stars Dong-Won Gang, Jung-hyun Lee, and Re Lee. Peninsula is releasing in theatres in India on November 27. 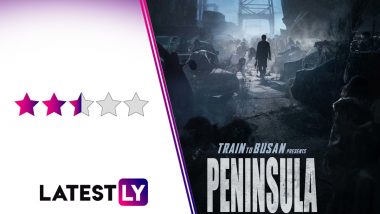 Peninsula Movie Review: Yeon Sang-ho's Train to Busan, the 2016 film Korean horror-thriller, is one of the finest zombie thrillers made in this century. I am not a very huge zombie fan, as I can't digest the gnarly sights of gory entrails left behind by the brain-less but vicious undead, though I had enjoyed some of the late George Romero's films in the genre, as well as zomcoms like Shaun of the Dead, Zombieland and even the Indian offering, Go Goa Gone. But Train to Busan was truly different and appealing even to a non-zombie aficionado like me. Peninsula: Train to Busan Sequel Is Hitting Indian Screens on November 27.

It brought freshness into a tired genre, by setting the survival action mostly in a train and doing a fantastic job at that. But what really wins you over is that Train To Busan hits all the right emotional notes, and at a couple of moments, left me teary-eyed - an unusual occurrence for a horror film. Ever since I watched the film, I have become a huge fan of its two main lead stars - Gong Yoo and Ma Dong-seok (Salman Khan is stepping into Dong-seok's shoes for Radhe, the remake of The Outlaws).

In comparison, Peninsula, with Yeon Sang-ho returning back to the director's chair, works more like a standalone sequel. It may continue to see an alternate South Korea's devastation through zombie infestation, but doesn't follow the stories of the surviving characters from the first film.

Here, we meet Jung-Seok (Gang Dong-won), a former Marine Corps officer, who is holed up in Hong Kong after escaping from Korea, now dubbed the Peninsula. He is living with the guilt of seeing his sister and nephew being attacked and killed by the undead, en route their way to Hong Kong four years ago, when an infected manages to board the ship.

His brother-in-law Chul-min (Kim Do-yoon) is leading a vagrant life and blames him for not saving their kin. Perhaps to appease Chul-min, Jung-Seok takes up a Chinese gang-lord's offer of going back to Peninsula and stealing a truck filled with 20 million dollars worth cash, in an attempt to use the money to escape from Hong Kong.

When they reach the quarantined territory, they find the truck but are attacked by the infected. Two of their companions are killed, and Chul-min is captured by a troop of former soldiers who have become wild, after finding no route to escape, and they use the captured undead and survivors for a series of death games. Peninsula Movie Review: Train to Busan Sequel Gets a Mixed Response From Critics.

Jung-Seok, meanwhile, is rescued by two sisters Jooni (Lee Re) and Yu-jin (Lee Ye-won), who take him to their hideout, where he meets their widowed mother Min-jung (Lee Jung-hyun) and their crazy grandfather Elder Kim (Kwon Hae-hyo. The movie then follows Jung-Seok's subsequent attempts to escape from the peninsula, with the family and truck, while trying to rescue Chul-min from his captors.

Peninsula is not a bad movie per se. There are a quite a few thrilling moments, that begin with the scene of a person turning infected in the ship (and thus spelling doom for Jung-Seok's family) to the plenty of chase sequences. The direction is commendable, and the art direction is impressive. Watch the sequence where Chul-min is forced into a game of death with the infected, that boasts of some impressive camerawork and editing. Even the characters are likeable enough, with the impish Yu-jin being an absolute scene-stealer. The special effects and zombie makeup leave nothing to complain about much.

It also feels very topical with its timing. Sure, we are not facing hordes of zombies coming at us to have their pound of flesh. But the words 'quarantine', 'infected', 'virus' have taken some horrifying proportions in present times.

So why do I feel underwhelmed after watching a decent zombie film, that is far from the worst in the heap? It's because Peninsula comes with the Train to Busan tag. It lacks neither the freshness and the ingenuity that the original brought, nor we really get the emotional connect with the characters. At best, Peninsula can be described as Korea's answer to The Walking Dead, only that we don't need to suffer 12 seasons of that!

- Brings Nothing New to the Table

For the zombie-hounds, Peninsula may work well as a decent horror-thriller with enough action moments and engaging characters. The fact that it doesn't go anywhere near the yardstick set by its predecessor may feel disappointing to the rest of us.

(The above story first appeared on LatestLY on Nov 26, 2020 06:31 PM IST. For more news and updates on politics, world, sports, entertainment and lifestyle, log on to our website latestly.com).