Dune: Fans Can’t Believe Timothee Chalamet’s Sci-Fi Film Has Budget Less Than That of Black Widow, No Time To Die and TENET! 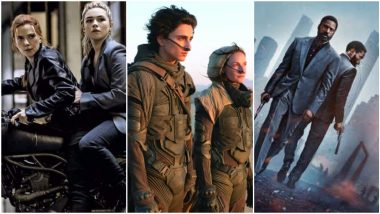 Denis Villeneuve's adaptation of Frank Herbert's 1965 novel Dune has been out in theatres a few days back, and it has been receiving quite the good response. While critical acclaim isn't a new thing for the filmmaker of movies like Incendies, Prisoners, Arrival and Blade Runner 2049, Dune has also take a good start at the box office. At this point, Dune has earned $223.2 million, counting both its global theatrical run and on HBO Max, quite decent for a film that isn't very simplistic and is seen more of an setup for an action-packed sequel, that may or may not happen. Dune Movie Review: Timothee Chalamet’s Sci-Fi Film Is a Visual Treat!

While discussing the box office figures, it came to the attention of the fans that Dune was made on the budget of $165 million (not including the marketing costs). This has come as a stunning news for them, mainly because the film is a visual treat with some practical production designs, and some very smart usage of CGI enhanced by its sweeping camerawork.

Even more shocking for them is when they compared the budget of Dune with that of some other recent big-screen extravaganzas like Black Widow and Eternals. Black Widow, while supposedly a contained superhero movie, had a budget of $200 million, while the upcoming Eternals has the same budget, as per reports in Box Office Mojo. Black Widow Movie Review: Florence Pugh Steals Scarlett Johansson’s Deserving Thunder in Her Underwhelming Solo Outing!

Christopher Nolan, who absolutely loved Dune, made his last blockbuster, Tenet, on a budget of $200 million. Warner Bros, who has produced Dune, had also made James Gunn's The Suicide Squad at the budget of $185 million. So $165 million for Dune feels kinda unbelievable!

Check Out the Reactions Below:

Watch #Dune and try to figure out how the budget was only $165m. It doesn’t make sense. pic.twitter.com/mlnyd1f95x

Have to Agree Here!

I feel even less inclined to give future Disney/MCU movies a light pass on conspicuous CGI after Dune. It was made with less budget and looks 100x better.

Is It a Trick?

The greatest trick the devil ever pulled was convincing google and you dipshits that Dune had a production budget of $165 million dollars.

Wait, Dune's budget was $165 million? Even Tenet was substantially more expensive than that, not to mention pretty much every Marvel movie.

I just read that #Dune ‘s budget is 165mn USD. Black Widow, which I also saw this year, cost 200mn to produce. How on Earth is it possible that Dune looks SO MUCH BETTER in every aspect? Heck, James Bond‘s NTTD cost 250mn and looked amazing but… surely not 50% ”better“.

Not only does Dune has some spectacular special effects, but it also has a star-stacked cast in Timothée Chalamet, Rebecca Ferguson, Oscar Isaac, Josh Brolin, Stellan Skarsgård, Dave Bautista, Zendaya, David Dastmalchian, Charlotte Rampling, Jason Momoa, and Javier Bardem. So Denis Villeneuve making the film within such a controlled budget is nothing short of impressive, if true!

(The above story first appeared on LatestLY on Oct 26, 2021 07:17 PM IST. For more news and updates on politics, world, sports, entertainment and lifestyle, log on to our website latestly.com).