Dune: With the Sequel to Timothée Chalamet’s Sci-Fi Film Confirmed, Here’s What You Can Expect From Part Two

Dune Part Two has officially been greenlit and Sci-Fi fans are celebrating. So lets take a look at what all you can expect from Dune Part Two. 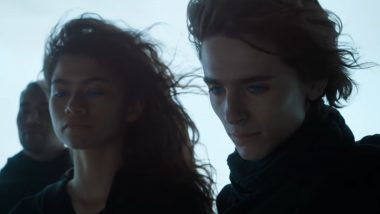 Something that comes as a shocking surprise and a win for many Sci-Fi fans, Dune: Part Two has officially been greenlit. The announcement comes just a few days after release as the film has had massive success on HBO Max and at the box office. Dune over the course of a few days has already collected $223 Million and had the biggest opening of the weekend for a film that also debuted on HBO Max. Combine this with the great word of mouth it’s been receiving, it’s a happy surprise to see a sequel been greenlit. Dune Movie Review: Timothee Chalamet’s Sci-Fi Film Is a Visual Treat! (LatestLY Exclusive).

This is only the beginning...

Thank you to those who have experienced @dunemovie so far, and those who are going in the days and weeks ahead. We're excited to continue the journey! pic.twitter.com/mZj68Hnm0A

Dune: Part One covers the first half of the novel that ends with Paul and Lady Jessica finally finding the Fremen and going off with them in the desert. The ending was a big cliffhanger that sort of did make the film feel incomplete, but that’s because the other half of the story will be told in Dune: Part Two. So what can we expect from Dune: Part Two?

*SPOILERS FOR DUNE: PART ONE AND TWO*

Dune: Part One ended with Lady Jessica and Paul going with the Fremen, we will see a more Paul centric story here, more so than Part One actually. Chani who was played by Zendaya will have a much bigger role here. She will have a romantic relationship with Paul and bear him two children, but they never get married. Paul will also have a rise in the Fremen ranks and will lead them in the battle against the Harkonnens. This will be the fight for Arrakis that was so heavily teased in Part One. Also the sandworms will have even a bigger part here as the Fremen will ride them in battle.

We will be getting new villains as well aside from the Harkonnens. The Emperor Shaddam IV will also serve as an antagonist in the sequel, the same emperor who gave the blessing for the destruction of House Atreides. Feyd-Rautha Harkonnen as well is a big character who has quite the complicated relationship with his father, the Barron. While he wasn’t shown in Dune: Part One, we can surely expect him to show up in Part Two. Dune Part 2 Confirmed! Sequel to Denis Villeneuve’s Sci-Fi Film To Release on October 20, 2023.

Also you might be wondering what happens to Josh Brolin’s character, Gurney Halleck, as he isn’t seen after the fight with Arrakis. Well fret not, he is alive and safe. He will be back in Dune: Part Two and will have quite the arc with Lady Jessica. He believes that Lady Jessica was the reason the attack took place which will lead to quite a complex storyline. Also fans of Jason Momoa’s Duncan Idaho, don’t worry too, there is a surprise over here for you guys too.

Well this is basically what you can expect from Dune: Part Two. With the story already set up and laid out, you can expect more action and excitement over here. It’s great that this is getting a sequel and that Denis Villeneuve gets to fulfill his vision. Dune: Part Two can’t get here soon enough.

(The above story first appeared on LatestLY on Oct 27, 2021 01:03 PM IST. For more news and updates on politics, world, sports, entertainment and lifestyle, log on to our website latestly.com).