Gadot would go on to earn her big break when she would star as the DC superheroine Wonder Woman in Batman v Superman: Dawn of Justice. From there on out, Gadot would star in some extremely huge blockbusters. 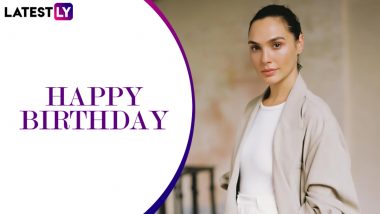 Gal Gadot over the years has become something of an icon. Hailing from Israel and starting out as a model, Gadot would start out with acting in small roles. She would earn her big break then when she joined the cast of Fast and Furious and then had a full-blown role in Fast Five. Since then, she has appeared in countless movies that have not only been commercially successful, but critically as well. Gal Gadot Celebrates Wonder Woman 1984’s One Year Anniversary With Unseen BTS Clicks, Pens a Heartfelt Note!

Gadot would go on to earn her big break when she would star as the DC superheroine Wonder Woman in Batman v Superman: Dawn of Justice. From there on out, Gadot would star in some extremely huge blockbusters. So, to celebrate Gal Gadot’s 37th birthday, let’s take a look at five of her best movies according to IMDb. Heart of Stone: Gal Gadot Reveals Filming on the Upcoming Netflix Spy Thriller Has Begun; Shares First Look at Her Character! (View Pics).

The gang is back together when a new threat by the name of Shaw arrives on the scene. The only thing being, it’s personal for Toretto this time as Letty has somehow returned from beyond the grave as well. Dom and team then set out on an adventure that’s filled with some spectacular set pieces that will definitely leave you in awe.

Generally regarded as one of the series’ best films, Fast Five sees Dom gather a team together to pull of one of the biggest heists you will ever see. Introducing some new characters to the saga, this movie is an entertaining action flick that will leave you entertained in the best way possible. Not to mention, Gal Gadot’s Gisele kick a lot of butts here.

After Steve Trevor crash lands on Amazon, he lets the warriors of Themyscira know about the war plaguing the outside world. Diana decides to help him end the war and embrace her destiny in becoming the Wonder Woman. This was a great first film for the character that got everything right about her. Not to mention, it’s one Gadot’s most powerful performances yet.

When the movie originally released, it was panned by majority of the critics as it felt incoherent in many ways. Luckily, the ultimate edition adds much needed context to many scenes and let’s the plot breathe. Featuring the World’s Finest fight, each other, this is an iconic film. Not to mention, the badass debut of Wonder Woman here.

Zack Snyder’s Justice League was a victory for fans around the world who campaigned for the director’s original version to be restored. A major improvement on the previous cut, it saw Batman gather a group of superheroes to take on Steppenwolf. Featuring some great action scenes and a lot of heart, this is a film for the ages.

Gadot truly has been iconic as Wonder Woman, and we can’t wait to see her return. With that being said, we finish off the list and wish Gal Gadot a very happy birthday.

(The above story first appeared on LatestLY on Apr 30, 2022 09:40 AM IST. For more news and updates on politics, world, sports, entertainment and lifestyle, log on to our website latestly.com).