Greta Gerwig Birthday Special: From Frances Ha to Little Women, 5 of Her Best Films As Per IMDb!

With how influential Greta Gerwig’s work has been, for her 38th birthday we are taking a look at five of her best films ranked on IMDb. We will be taking a look at movies that she has directed, starred in, and even penned. 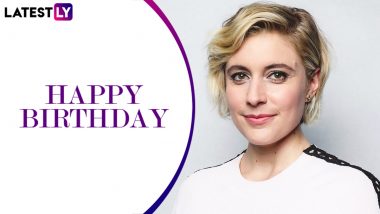 From being an Indie Darling to going and directing two highly acclaimed movies, Greta Gerwig has become one of the best working directors in Hollywood right now. Greta Gerwig originally had her start by starring in Indie movies where she had some great roles and films and has worked with some great directors. In recent times her turn to directing also has fared her well, Greta Gerwig directed Lady Bird and Little Women which have earned her critical acclaim and Oscar nominations.  Helena Bonham Carter Birthday: From Fight Club to The King’s Speech, 5 of Her Best Films!

With how influential Greta Gerwig’s work has been, for her 38th birthday we are taking a look at five of her best films ranked according to IMDb. We will be taking a look at movies that she has directed, starred in, and even written. The Witcher Season 2: 5 Hints About the Plot We Got From the New Promo of Henry Cavill’s Netflix Series.

Gerwig starred in this 2015 coming-of-age drama and played the role of one of the house residents, Abbie Porter. 20th Century Women focuses on Jamie, a 15-year-old boy who is courted by people around him to get his life back on track. The film was widely appreciated for its performances and its neat take on the coming-of-age drama.

Teaming up with her husband, Noah Bumbach, Gerwig stars and co-writes Frances Ha. She plays the role of Frances Halladay, a struggling dancer with the hopes of settling down. The movie was widely appreciated for Greta Gerwig’s amazing showcase of her acting capabilities.

Gerwig returned to directing with ‘2017s Lady Bird. It follows a Sacramento teenager who has a troubled relationship with her mom and hopes to leave the city and start her life somewhere else. Lady Bird was one of the best-reviewed films of 2017 and helped establish Gerwig as a director to be on the lookout for.

Gerwig by now has mastered telling coming-of-age stories, and its further proven by her feature, Little Women. The seventh adaptation of the novel of the same name, Little Women features a splendid cast. It follows the March sisters during the nineteenth century and is one of the best adaptations of the novel. Little Women received critical acclaim upon its release and was nominated for numerous awards including the Oscars. Patrick Stewart Birthday Special: From X-Men to Logan, 7 Awesome Quotes of Professor X You Would Like, Mutant or Not!

Starring in Wes Anderson’s Isle of Dogs, Greta lent her voice to the character of Tracy Walker who is an exchange student. Isle of Dogs tells the story of a boy, who after losing his dog sets on a journey to bring him back from an island that’s filled with dogs. The movie received critical acclaim for its social commentary and the spectacular display of stop motion animation.

We wish Greta Gerwig a really happy birthday and hope that she continues to make amazing films.

(The above story first appeared on LatestLY on Aug 04, 2021 09:40 AM IST. For more news and updates on politics, world, sports, entertainment and lifestyle, log on to our website latestly.com).