The Witcher Season 2: 5 Hints About the Plot We Got From the New Promo of Henry Cavill’s Netflix Series

The past weekend, Netflix had its Witchercon wrap up. Netflix teamed up with videogame developer CD Prokjekt Red who are famous for developing The Witcher games, to hold a virtual event for all The Witcher fans around the globe. 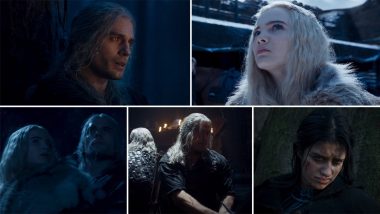 The past weekend, Netflix had its Witchercon wrap up. The OTT giant had teamed up with videogame developer CD Projekt Red, who is famous for developing The Witcher games, to hold a virtual event for The Witcher fans around the globe. The virtual event consisted of a new trailer for The Witcher Season 2 which heavily focused on Geralt and Ciri. It seemed to dive more into the backstory of the Witchers and showcased the castle of Kaer Morhen, where the Witchers reside.  The Witcher Season 2 Teaser Trailer: Henry Cavill’s Fantasy Series to Premiere on Netflix on December 17 (Watch Video).

With a lot happening in this trailer, it definitely has the fans of season one and the books excited for what’ next to come. The Witcher Season 2 is scheduled to premiere on Netflix on December 17, 2021 and stars Henry Cavill, Anya Chalotra and Freya Allen.

If you’re a fan of The Witcher series, both the games and the books, then you know the importance of Kaer Morhen in the lore. It’s a castle where the Witchers reside and train. In the trailer, the castle itself looks spectacular as it retains a striking resemblance to Kaer Morhen that was featured in the videogame, The Witcher III: The Wild Hunt.

With Geralt finally finding Ciri at the end of season one and learning about his destiny, this next season has us excited for the development of their relationship. Fans of the books and the video games will be really excited to witness Geralt train Ciri in Kaer Morhen and how it could lead the series going further. The bulk of The Witcher is mainly focused on the guardian sort of relation that Geralt and Ciri have, so with the show finally sinking its teeth into the meat of the story has us excited for where it will go.

Some scenes from the trailer may indicate that we may see a battle take place at Kaer Morhen. With Geralt telling Ciri to hide and run and a shot of him teaming up with Vesemir has us excited to see the scope of battles that season two will present us with. We can even see a flying monster in one of the scenes, so what that may be also has us speculating as to what’s actually happening at Kaer Morhen.

With the final battle against the Nilfgaardian army at the end of season one, Yennefer’s fate was a bit of a mystery. It looks like season two will directly pick up Yennefer's story from season one as the final shot sees the mage being found by her group.

(The above story first appeared on LatestLY on Jul 12, 2021 06:26 PM IST. For more news and updates on politics, world, sports, entertainment and lifestyle, log on to our website latestly.com).