Happy Birthday Shailene Woodley: Check Out 5 Ultra-Awesome Pictures Of The Fault In Our Stars Actress

Shailene Woodley celebrates her 28th birthday on November 15. The 28-year-old diva shot to fame after portraying the role of Hazel Grace Lancaster in John Green's book adaptation of The Fault In Our Stars. Here are some pretty pictures of the actress! 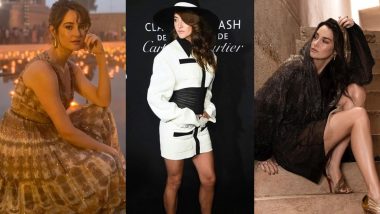 Shailene Woodley celebrates her 28th birthday today. The actress, who rose to fame thanks to her performance as Hazel Grace Lancaster in the romance drama, Fault in Our Stars, has managed to sustain her fandom with impeccable roles. While The Fault in Our Stars was just a start for the actress, she soon managed to become a part of several big Hollywood films such as The Spectacular Now, The Descendents, Snowden and more. Not to mention, she also rubbed shoulders with Hollywood's topnotch women, Nicole Kidman, Reese Witherspoon and more as she has been associated with The Big Little Lies, an HBO web series. Shailene Woodley's career graph has seen a constant peak and never a fall. Shailene Woodley Birthday Special: 5 Lesser-Known Facts About The Big Little Lies Star's Activism That Will Impress You!

However, it's not just the films that make fans go gaga. The diva is a beaut and one of the most inspiring individuals with her activism and staunch take on various social concerns. On Instagram, you'll find some really interesting posts by the actress about planting more trees, having a positive body image, propagating love and not hatred and much more. But aside from the serious posts, she also likes to have some fun. There are some really adorable and impeccable looks that Shailene has put up on Instagram and it would be a shame to not check them out. So without further adieu, scroll away and see how the birthday girl keeps her (and our) Instagram lively with cute posts!

@ccaliforniastyle out now ! can take the girl outta cali , but not cali outta the girl ! #californiachickforlife #cmagazine #BLL2. the team behind this shoot was truly a dream.

No words left for this beauty!

Shailene is clearly one of the best celebrities and influential personalities in Hollywood. Be it her social activism or her choice of films, the actress knows what she's doing!

(The above story first appeared on LatestLY on Nov 15, 2019 02:50 PM IST. For more news and updates on politics, world, sports, entertainment and lifestyle, log on to our website latestly.com).