Harvey Weinstein Scandal: Former Model Accuses the Movie Producer of Sexually Assaulting Her When She Was 16; Refuses to Accept the ‘Global Settlement’

Harvey Weinstein was expelled from his company after dozens of women accused him of sexual misconduct. It was almost a week ago when the disgraced movie mogul and the board reached a tentative $25 million settlement with the women who accused him with several allegations. 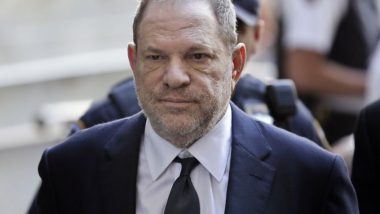 Harvey Weinstein was expelled from his company after dozens of women accused him of sexual misconduct. It was almost a week ago when the disgraced movie mogul and the board reached a tentative $25 million settlement with the women who accused him with several allegations that ranges from sexual harassment to rape. As per latest reports, an ex-model has accused Weinstein for sexually assaulting her when she was 16, and she has also mentioned that she refuses to accept the proposed ‘global settlement’. Harvey Weinstein Reportedly Reaches Tentative $25 Million Settlement With More Than 30 Accusers, Emily Ratajkowski and Others Express Disappointment.

The Polish model who was earlier known as “Jane Doe” in an earlier class action lawsuit has decided to remove herself from that suit and go public. She has filed a new case under her name, Kaja Sokola, under the New York’s Child Victims Act. In the lawsuit filed, Sokola has mentioned that she was 16 and Harvey was 50 when he sexually assaulted her. In 2002 she had moved to New York with ambition of becoming an actress. She met Harvey at an event that was associated with her modelling agency. Harvey showed interest in the 16-year-old (then) and assured to help her to fulfill her ambitions, and invited the young girl for lunch. When Brad Pitt Confronted Harvey Weinstein For Ex Gwyneth Paltrow.

The Polish model (who thought it would be a business lunch) claims that Harvey Weinstein’s driver took her and Weinstein (who was also in the car) to his apartment instead of a restaurant. Weinstein reportedly asked her to take off her garments and began to touch her private parts. In the complaint filed the statement reads, “forcibly held Sokola while taking her hand and making her touch and massage his penis while he grabbed at her breasts.” After the incident when she tried to leave his apartment Weinstein insisted that what happened was ‘normal’ and also said she needs to work on her ‘stubbornness’.

Sokola said in a statement to CNN, “I cannot accept the proposed ‘global settlement’ as fair or just. There is no accountability for the perpetrators, insufficient compensation for all of the victims and millions of dollars going to people that I believe enabled Weinstein.” She also mentioned, “Therefore, today I am filing my own case, in my own name, under New York’s Child Victims Act.” Sokola’s lawyer Douglas Wigdor was quoted as saying, “While others may have decided to settle, albeit under some of the most offensive and one-sided terms, we hope that the filing of this complaint encourages other victims and the New York attorney general to join us as we continue our efforts at holding Harvey Weinstein and his enablers accountable.”

(The above story first appeared on LatestLY on Dec 20, 2019 08:39 AM IST. For more news and updates on politics, world, sports, entertainment and lifestyle, log on to our website latestly.com).