Is Farhan Akhtar Part Of Marvel's Ms Marvel Series? Here's Why We Think So

Reports suggest Farhan Akhtar is in Bangkok to shoot a Marvel Studios series and we have reasons to believe it could be Ms Marvel. The cast and crew of the Marvel series were supposed to shoot in Bangkok for the next schedule. Just joining the dots here. 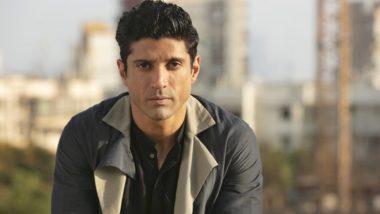 Farhan Akhtar has apparently jetted off to Bangkok to shoot a Marvel Studios series. He has managed to keep the details under wraps. He is shooting there with the international crew. But we have a hunch. We wonder if Farhan Akhtar a part of Marvel's Ms Marvel series. The reason being the team of Ms Marvel, after wrapping up filming in Atlanta, was heading to Thailand's Bangkok for the rest of the schedule. Many believe the city will serve as a backdrop for Badin, Pakistan where Kareem or Red Dagger will be introduced. We know that the Red Dagger is played by Aramis Knight. So will it be too far-fetched to believe Farhan is shooting for Ms Marvel in Bangkok? Toofaan: Farhan Akhtar Gives Sneak Peek into His Initial Days of Training for His Boxing Movie (Watch Video)

We are aware that last year, Mohan Kapur had joined the cast of the series in Atlanta. He had heaped praise on the way the production was following COVID-19 protocols. The series has Iman Vellani, a Canadian actress of Pakistani origin, playing Kamala Khan/Ms Marvel. The others in the cast are Saagar Shaikh, Aramis Knight, Rish Shah, Zenobia Shroff, Matt Lintz, Yasmeen Fletcher, Laith Naki, Azher Usman, Travina Springer and Nimra Bucha. Ms Marvel: Mohan Kapur Officially Cast As Kamala Khan’s Father in Disney+ Show, Know Everything About the Indian Actor

Ms Marvel is expected to release by the end of 2021. We hope we won't have to wait so long for confirmation on Farhan Akhtar's inclusion in the movie.

(The above story first appeared on LatestLY on Apr 08, 2021 03:32 PM IST. For more news and updates on politics, world, sports, entertainment and lifestyle, log on to our website latestly.com).