It: Chapter 2: Pennywise the Clown is Here to Scare You With This New Poster Ahead of the Trailer Release Tomorrow 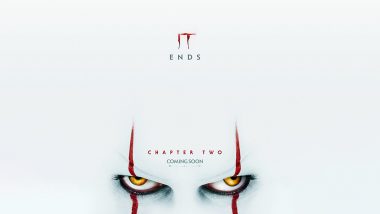 After we saw the first trailer of It: Chapter 2, all we can say is that it is way more terrifying than the first one. The film stars Jessica Chastain, James McAvoy, Jay Ryan, Bill Hader, Isaiah Mustafa, James Ransone, and Andy Bean as the adult version of Losers Club from part one. Actor Bill Skarsgård reprises his role as the scary clown, Pennywise. The sequel reunites the Losers Club nearly three decades after the events of the first film.  It: Chapter 2 Trailer: Pennywise is Back and He Will Scare the Daylights Out of You (Watch Video).

A new poster featuring Pennywise has been released by the makers and we have to say, his sight is enough to scare the daylights out of you. A new trailer of the film is all set to release tomorrow and we are sure things will be getting spookier. The poster shows the film's name It Ends along with the film's release date, September 6.

The first It, based on the Stephen King novel, earned more than $700 million globally in 2017 and stands as the No. 1 horror movie of all time, it will be interesting to see if the sequel will now go further. Actor Bill Skarsgard's portrayal of Pennywise too won him a lot of praises. 'It' Director Andy Muschietti Reveals, ‘Chapter Two Was Easier to Film Than Part One’.

Directed by Andy Muschietti, screenwriter Gary Dauberman returns for the sequel. The film has been produced by Seth Grahame-Smith and David Katzenberg. It: Chapter 2 is all set to release on September 6. Stay tuned for the trailer coming tomorrow.

(The above story first appeared on LatestLY on Jul 17, 2019 10:47 PM IST. For more news and updates on politics, world, sports, entertainment and lifestyle, log on to our website latestly.com).

Comments
Tags:
Bill Skarsgard it It Ends It: Chapter Two James McAvoy Jessica Chastain Pennywise
Comments
You might also like