Jason Momoa Birthday Special: From Declan Harp to Conan the Barbarian, 5 Popular Roles of the Actor Beyond Aquaman and Game of Thrones

Jason Momoa has enjoyed quite the healthy career where he has gone onto to become a substantially popular actor. Jason Momoa rose to fame when he played Khal Drogo in HBO’s Game of Thrones and then rose to worldwide fame by playing Aquaman. Although many people just look past Jason Momoa’s previous roles, 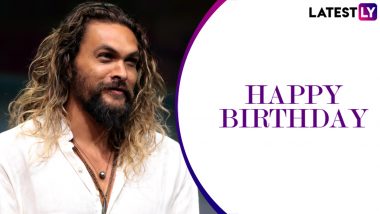 Jason Momoa has enjoyed quite the healthy career where he has gone onto to become a substantially popular actor. Jason Momoa rose to fame when he played Khal Drogo in HBO’s Game of Thrones and then rose to worldwide fame by playing Aquaman. Although many people just look past Jason Momoa’s previous roles, he was equally charming and brought great energy to them as well. See Season 2 Trailer: Jason Momoa Returns As Blind Warrior To Defeat Dave Bautista (Watch Video).

Momoa is able to elevate any movie or show he is in with his acting. He brings this sense of masculinity and aggressiveness to some of his characters while still maintaining a heroic persona. So with his 42nd birthday, we are taking a look at five of his best non Game of Thrones and Aquaman roles. Dune Trailer: Timothée Chalamet, Zendaya, Jason Momoa Lead Denis Villeneuve’s Star-Studded Sci-Fi Fantasy (Watch Video).

Keegan (A Bullet to the Head)

Momoa taking on Sylvester Stallone, it can’t get more badass than that. Momoa starred alongside Stallone in 2012's A Bullet to the Head where he played the role of Keegan. Momoa in an antagonistic turn portrays the character well and has some great scenes with Stallone.

Road to Paloma is a great tale of revenge and acceptance which is directed by Momoa himself. He plays the role of Robert Wolf, a character who has had a fairly tragic life and Momoa plays this role quite beautifully. If you ever want to see Momoa give a heartfelt performance, then Road to Paloma is for you.

Spyder (Once upon a Time in Venice)

Momoa stars alongside Bruce Willis in this action comedy film. It sees Momoa give an antagonistic performance where he plays the role of Spyder and steals Bruce Willis’ dog. If that doesn’t make you hate the character instantly, then I don’t know what will, but Momoa is able to make the best out of this role.

Taking over the role from Arnold, Momoa stars in this remake of Conan The Barbarian. He is able to differentiate his performance from Arnold’s and makes it his own. Even though the movie was panned by critics, Momoa was great in the role.

Perhaps one of his best roles, Momoa portrays Declan Harp in the Canadian series, Frontier. Frontier is all about the fur trade in the ‘1700s and Momoa is great as Declan. The show is violent and Declan’s characteristics compliment it really well.

With this we finish off our list and wish Jason Momoa a really happy birthday. He will be next seen in Dune, Aquaman and the Lost Kingdom, Sweet Girl and the second season of See.

(The above story first appeared on LatestLY on Aug 01, 2021 09:11 AM IST. For more news and updates on politics, world, sports, entertainment and lifestyle, log on to our website latestly.com).