John Malkovich Birthday Trivia: You Have to Be Alive Till 2115 to Watch This Mysterious Film of the Con Air Actor! (Watch Video)

Directed by Robert Rodriguez of Back to the Future fame, this special film is made in collaboration with the premium wine company, Louis XIII Cognac. The movie is titled 100 Years with an appropriate tagline - 'The Movie You Will Never See'. 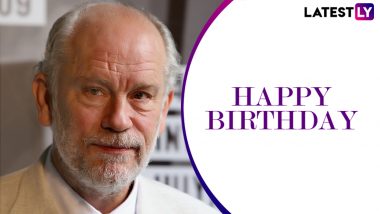 John Malkovich is a fantastic actor who has been part of many popular films. Some of his notable movies are Con Air, Being John Malkovich, Red, Burn After Reading, Transformers: Dark of the Moon, Bird Box etc. But there is one film in the actor's repertoire that you are not going to see in your lifetime. Unless you are born after 2015, and the pollution, global warming or the increase in global violence don't kill you before you reach 100. Yes, you have to wait till 2115 to watch that John Malkovich-starrer. Space Force: John Malkovich, Ben Schwartz Join Steve Carell for Netflix’s Upcoming Comedy Series.

Directed by Robert Rodriguez of Back to the Future fame, this special film is made in collaboration with the premium wine company, Louis XIII Cognac. The movie is titled 100 Years with an appropriate tagline - 'The Movie You Will Never See'. 100 years is also the time for a bottle of cognac from the company to rightly mature, and hence the duration of its delayed release.

As of now, we don't have much details of what the film is all about. We have three teasers for the film, that made their way to YouTube, which gives the idea that the film may be a futuristic sci-fi flick. Or something of a retro kind. Or it could be about nature. But in an interview he gave in 2019, Rodriguez claims that the teasers is merely commercials for the company, and refrains from giving any further details as to what the short will be about.

Watch the Future Teaser below:

It feels that even the makers aren't even sure how our future will look like, by coming out with three teasers of different themes. Going by the trailers, Malkovich will also be joined by Shuya Chang and Marko Zaror in the movie. Malkovich himself had written the script for 100 Years. Glenn Close Birthday: From Fatal Attraction to The Wife - 5 Best Performances Of the American Actress That Are Unmissable.

So where is this film now? As per a report in the Entertainment Weekly, the movie is kept in a very secure safe (with the bottle of Louis XIII Cognac, I presume) that has bulletproof glass protecting it, location of which is only known to very select few. The case will automatically open on November 18, 2115, when the premiere will be held. Apparently, 1000 invites for the film's premiere have already been sent to many dignitaries, including Malkovich and Rodriguez, who of course, have to pass them on to their descendants.

Sure, we aren't sure going to be alive when the future mankind (if they haven't gone extinct by then) gets to see 100 Years. But we can be considered as the lucky many to be in the life time of John Malkovich and wish him Many Many Happy Returns of the Day, and thank him for all the wonderful roles that he had given us.

(The above story first appeared on LatestLY on Dec 09, 2020 12:32 PM IST. For more news and updates on politics, world, sports, entertainment and lifestyle, log on to our website latestly.com).