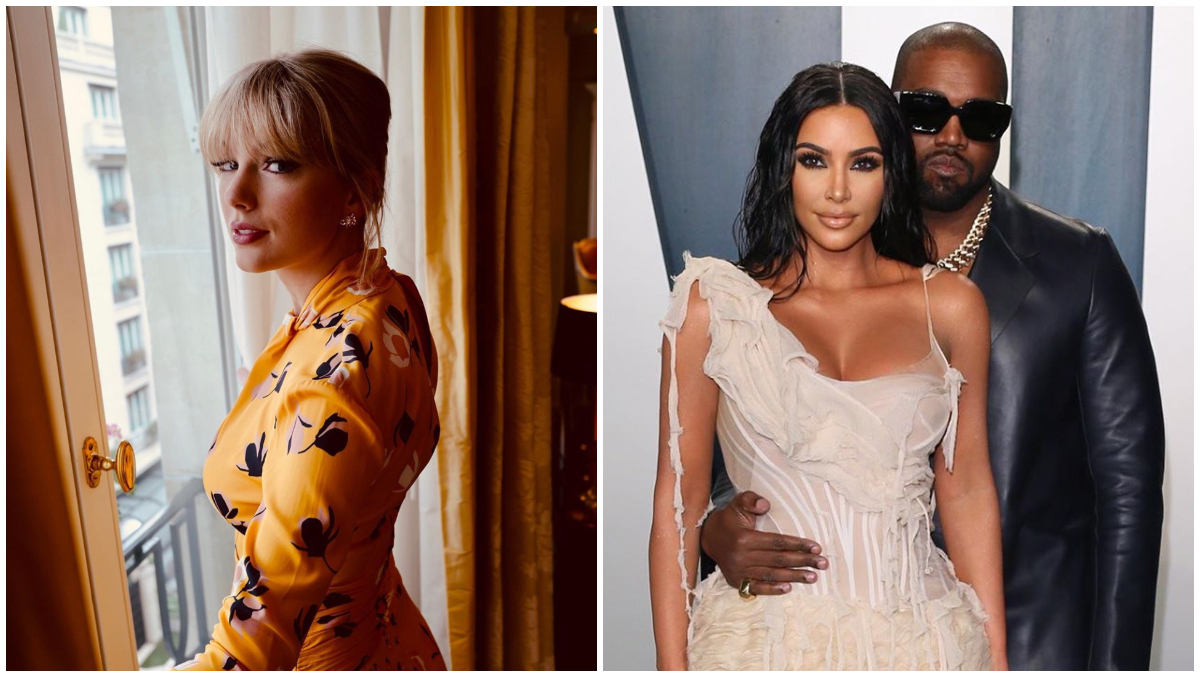 The Kardashian-West Vs Swift feud is not coming to an end, anytime soon. You can trace the origins of this feud back to the time when Kanye West interrupted Taylor Swift's winning speech. Now, it has come down to Swift and Kanye's wife, Kim Kardashian at loggerheads with each other over a leaked phone conversation. The video is alleged to be the unedited recording of the infamous phone call between West and Swift. Kim had released snippets of this conversation in 2016. The authenticity of the new leaked call is yet to be determined or acknowledged by parties involved. But Kim has gone as far as calling Taylor a liar, after the full conversation made its way on the internet on March 20, this month. Kanye West and Taylor Swift's Full Phone Call Leaked Video Exposes the 'Famous' Singer's Lies? Twitterati Trend #KanyeWestIsOver (Watch Video).

In 2016, Kanye released his song 'Famous' where the lyrics referring to Swift were "I made that bitch famous". She expressed her displeasure over it. In retaliation, Kim shared snippets of the phone conversation where Swift appeared to have given her permission to use the word. But there was no mention of the word 'bitch' in Kim's snippets and there is no mention of it in the new video either.

In the newly leaked audio, Taylor said "fine" when Kanye read the lines, "I made her famous”. Later, she also did not seem to mind the line "I feel like me and Taylor Swift might still have sex.” Taylor joked that “the feminists are going to come out” if Kanye went with the original version of that line, “I feel like Taylor Swift might still owe me sex.” Did Taylor Swift's Cats Have A Version With Realistic Feline Buttholes? Fans Trend #ReleaseTheButtholeCut As Information Leaks Online.

Kim did not wait for much time to hit back. "The video showed nothing new. We all knew that. I’m so confused right now," she wrote in her first tweet days ago.

Taylor Swift took to her Instagram story and addressed the leaked call in the best way possible. She wrote, “Instead of answering those who are asking how I feel about the video footage that leaked, proving that I was telling the truth the whole time about *that call* (you know, the one that was illegally recorded, that somebody edited and manipulated in order to frame me and put me, my family, and fans through hell for 4 years)..SWIPE UP to see what really matters,”

The action of swiping up would direct the user to a page where you can donate meals during the COVID-19 pandemic. But that doesn't mean she was not liking Tumblr posts where fans were celebrating this new vindication.

Check Out The Screenshots of Taylor's Stories Here: 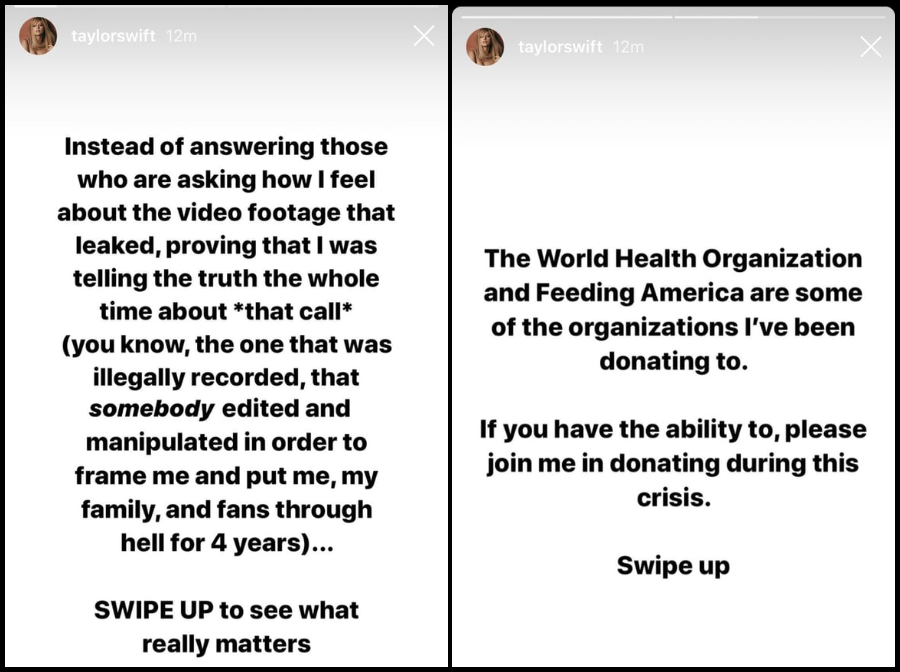 A couple of days later, Kim expressed herself in a series of tweets, where she even accused Swift of lying, accepting that the word bitch was used without permission and defending herself that she did not edit the audio in 2016. 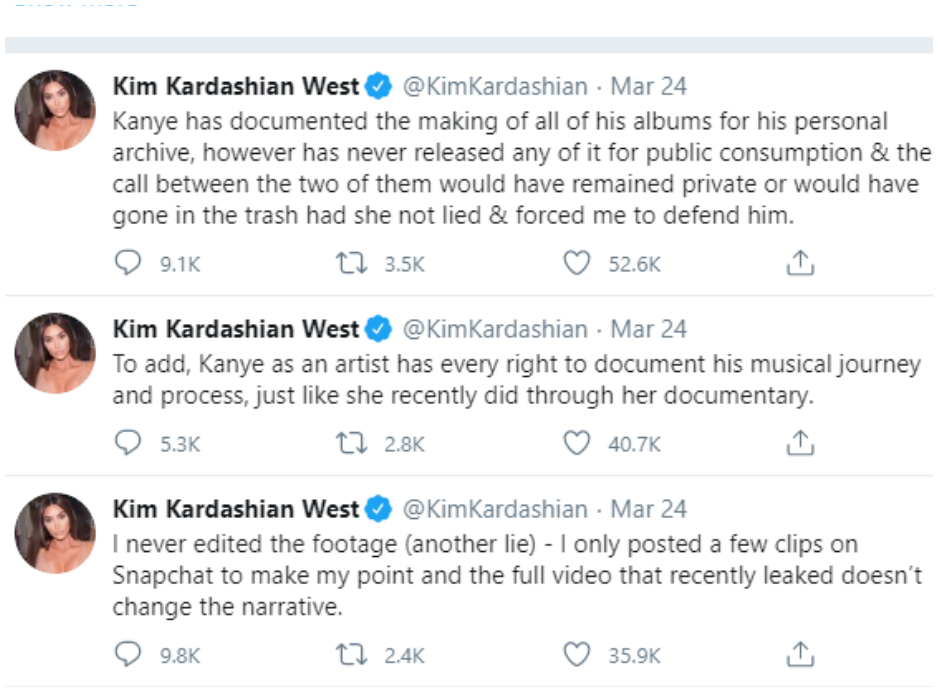 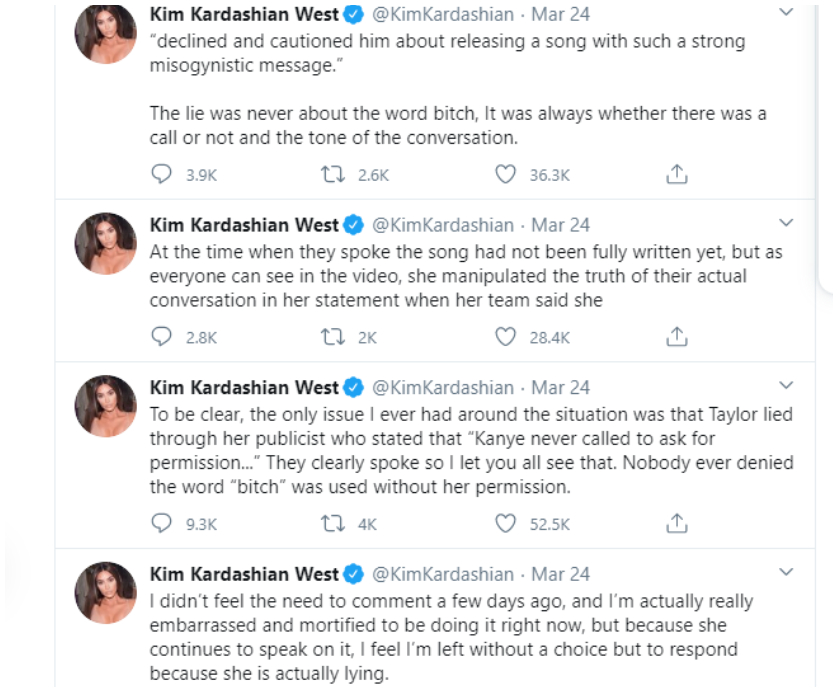 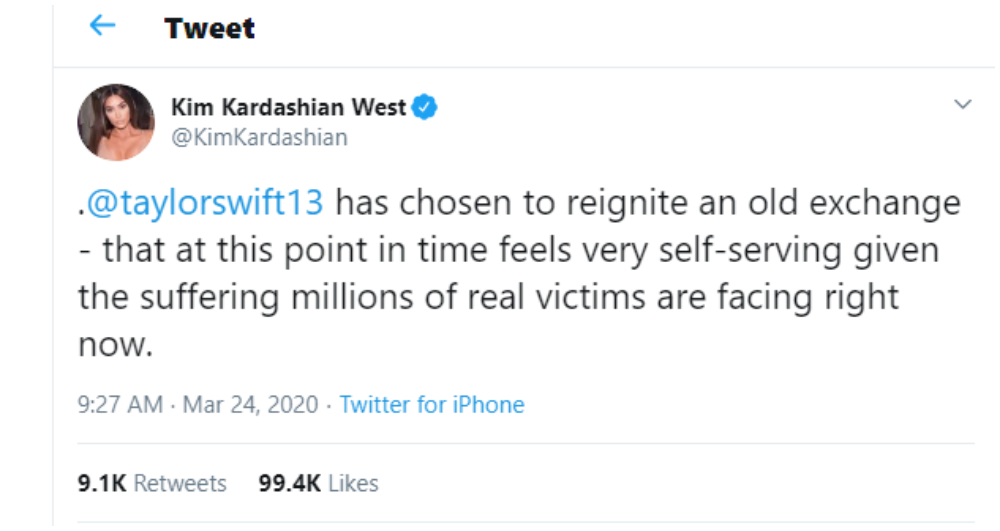 Check Out The Screenshot Below: 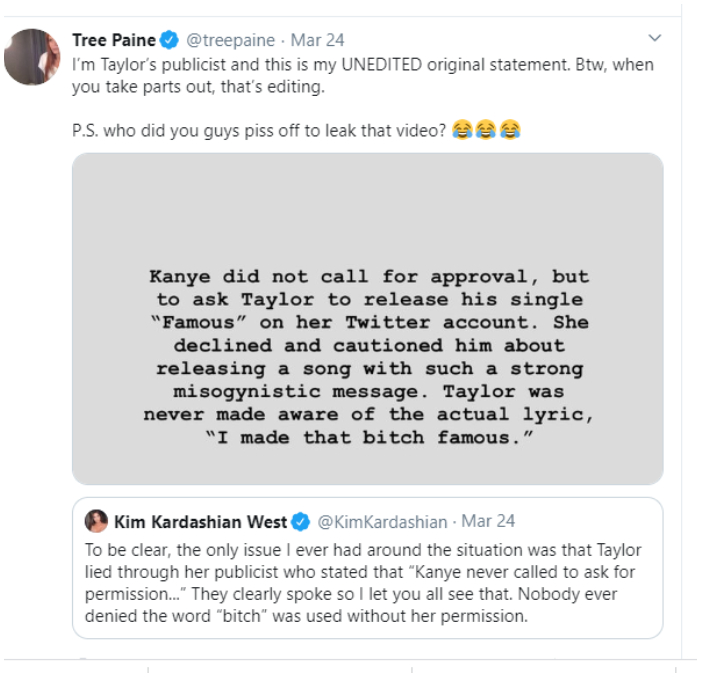 From here, it looks like Taylor's days of being called a snake on the internet are over. In fact, Twitterati trended hashtags like #KimKardashianIsOverParty and #KanyeWestIsOver. Well, for the ones who love DRAAMAAA, this feud surely providing ample fodder during the lockdown.