Be it his career lows or highs, Shyamalan's movies always turn out to be a talking point, during or after the release. So to celebrate his 51st birthday, we are taking a look at five of his best films according to Rotten Tomatoes. 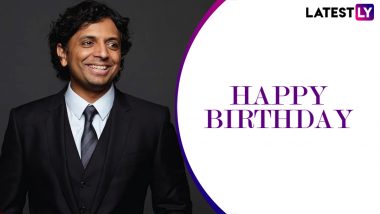 Be it his career lows or highs, Shyamalan's movies always turn out to be a talking point, during or after the release. So to celebrate his 51st birthday, we are taking a look at five of his best films according to Rotten Tomatoes.

This found footage comedy horror was a return to form for Shyamalan who had just been having a series of duds before this. The movie follows two siblings living with their single divorced mother, who are invited by their grandparents to spend a week at their farmhouse. Only it is not exactly the kind of break they want, as their grandparents turn out to be maniacal kookies.

After David Dunn is involved in an accident and survives with no injuries, he leads to the conclusion that he is harboring superpowers. Unbreakable is Shyamalan’s attempt at making a superhero film, and he knocks it out of the park. It features great performances from Bruce Willis and Samuel L Jackson with an unraveling story that will leave you in awe by the end. Bruce Willis Birthday Special: 10 Movie Quotes of the Die Hard Star That Sound Way Too Badass!

This Sci-Fi feature directed by Shyamalan boasts of fantastic performances by Mel Gibson and Joaquin Phoenix. It follows a farmer who slowly discovers extra-terrestrial life in his crop field as the film explores the theme of faith and aliens. Signs is widely revered among the science community and is appreciated for its take on the subject matter.

Split follows a man with 24 different personalities who kidnaps three girls in an underground facility. James McAvoy in arguably his best form here gives a powerhouse of a performance which takes this movie from good to great. The range that he showcases is unparalleled and that carries the film even in its weaker moments. James McAvoy Birthday: From Split to X-Men - Here Are 5 Best Films Of the Scottish Actor.

The film that put Shyamalan on the map and established him as a director to look out for. It stars Bruce Willis as a child psychologist whose most recent patient can talk to the dead. It made the public aware about Shyamalan's affinity for surprise endings and still remains his best film after all these years.

(The above story first appeared on LatestLY on Aug 06, 2021 09:11 AM IST. For more news and updates on politics, world, sports, entertainment and lifestyle, log on to our website latestly.com).