Minions The Rise of Gru Ending Explained: Decoding the Climax to Steve Carell’s ‘Despicable Me’ Prequel and How It Sets Up Another Film! (SPOILER ALERT) 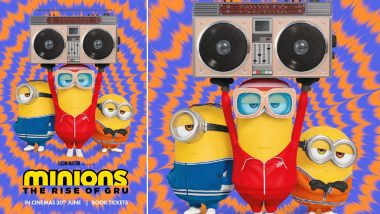 Minions: The Rise of Gru is out and we finally have another Despicable Me prequel on our hands focusing on our favourite yellow goofballs. A sequel to the 2015 film Minions, Minions: The Rise of Gru tells us the origin story of the supervillain and how he builds up his relationship with the small yellow creatures here. The film sees Gru steal a very important stone from the supervillain group the Vicious 6, and follows him and the Minions as they are away on a goose chase. Minions the Rise of Gru Movie Review: Steve Carell’s ‘Despicable Me’ Prequel Is a Hilarious Outing With Underwhelming Villains (LatestLY Exclusive).

Minions: The Rise of Gru was honestly quite surprising with how fun it was and how it packed in a great ending. The way that Minions: The Rise of Gru ends definitely ensures that we are set to get more stories. With easter-eggs and first-time character interactions happening here, it does set up a sequel. So, let’s take a look at what the ending is exactly about and how it sets up a sequel.

After defeating the Vicious 6, an injured Wild Knuckles is taken into custody and sent to a hospital. Gru bids him goodbye before being told to stay out of trouble by the authorities. We then cut to Gru at Wild Knuckles’ funeral giving his eulogy, but he sees him all well and alive in the background and figures out that he faked his death.

After the funeral, he meets up with Knuckles, where both decide to partner up and cause chaos. With the Minions joining them too, they are all now a team that will unleash villainy upon everyone. The group then rides off into the sunset.

But just before the movie can end, we are treated with Gru enlisting a young Nefario into his team so he can cook up some gadgets for him. Nefario originally declines, but gives into their request and Gru and the Minions make a puppy-face at him. They both leave in an airship that very much resembles Gru’s ship in the future.

How Does It Set Up a Sequel?

With Gru enlisting a young Nefario and teaming up with the Minions and Wild Knuckles, we are definitely bound to get another story with these characters. The entire movie is about Gru finding out how to work with others and trust his friends, it looks like that idea will be expanded upon in a sequel.

We can potentially see Gru lead his first supervillain mission with the help of Nefario and Wild Knuckles. There is also the set up of Vector being introduced as his photo is seen during a bank heist in the movie.

There are a bunch of easter-eggs sprinkled throughout the film, and it looks like a third Minions films will definitely capitalise on it. With Kevin, Stuart and Bob’s story being all about proving to Gru that they are not useless, perhaps we might even see the trio do more the next time around and help Gru with being the supervillain he is destined to be. Minions The Rise of Gru: Review, Cast, Plot, Trailer, Release Date – All You Need to Know About Steve Carell's Animated Sequel!

Minions: The Rise of Gru is currently playing in theatres right now.

(The above story first appeared on LatestLY on Jul 01, 2022 01:14 PM IST. For more news and updates on politics, world, sports, entertainment and lifestyle, log on to our website latestly.com).