The finale of the episode sees Peacemaker and team kill the cow, but just before they can leave the area they are approached by a League that will blow your socks off. 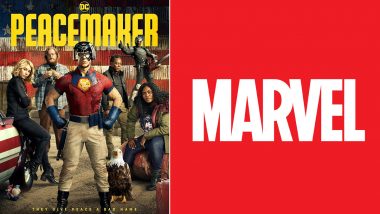 Peacemaker rounded off its season one with a spectacular episode. The episode saw Peacemaker and team fight the Butterflies and kill their Cow which was basically a giant worm. Featuring some great scenes and cameos that will blow your mind, it’s safe to say that James Gunn has delivered us yet another epic. Peacemaker: Fans React to the Surprise Superhero Cameos in the Season Finale of John Cena, James Gunn DC Series! (SPOILER ALERT).

The finale of the episode sees Peacemaker and team kill the cow, but just before they can leave the area they are approached by a League that will blow your socks off. Yes that’s right, the Justice League appears in Peacemaker.

Flash, Aquaman, Wonder Woman and Superman appear in the episode, with the latter two being obscured in shadows while Ezra Miller and Jason Momoa actually appear. Peacemaker cracks a rather crude joke about Aquaman which leads to a fun banter between him and Flash.

While Momoa was always on board for filming the cameo, in an interview with Variety Gunn confirmed that they shot Ezra’s cameo way later.

Gunn revealed that he heard from his friends that Ezra loved Gunn’s films. This prompted Gunn to ask Ezra to cameo at the end. Apparently the entire Flash cameo was shot by Marvel during the production of Guardians of the Galaxy Vol 3.

Gunn reveals that Marvel owed DC because Gunn shot Iduki Chukwudi’s screen test for Guardians of the Galaxy Vol 3 during the making of Peacemaker. Peacemaker Season 2: John Cena's DC Series Renewed Ahead of Finale; James Gunn Will Write and Direct all Episodes!

It’s great to see both the competitors come and help out each other like this. Creates a good sense of discourse online.

(The above story first appeared on LatestLY on Feb 18, 2022 06:12 PM IST. For more news and updates on politics, world, sports, entertainment and lifestyle, log on to our website latestly.com).