An Australian journalist, Peter Ford, posted a tweet asking if PeeCee and her husband Nick Jonas were qualified enough to announce the Oscar nominations. 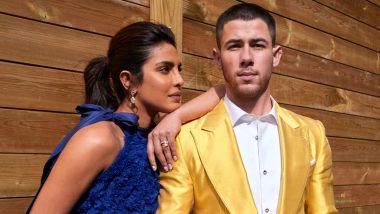 Priyanka Chopra, a global star, has seen criticism come her way in abundance and the actress has always given it back to trolls and hate comments. The actress very well knows how to handle any such situation subtly and often wins the hearts of her fans with her comebacks. Mostly when Priyanka is trolled for her dresses and makeup, she takes it in a stride and joins the bandwagon to appreciate the memes but when it comes to a serious issue, she makes sure she makes a solid point and shut the trolls. Something very similar happened when the actress was trolled for nominating the Oscars. Priyanka Chopra’s Ball Green Dress Inspires Funny Memes and Jokes! From ‘Boriya Bistar’ to ‘Sutli Bomb,’ Hilarious Reactions Are Lit.

An Australian journalist, Peter Ford, posted a tweet asking if PeeCee and her husband Nick Jonas were qualified enough to announce the Oscar nominations. He shared a picture of Nickyanka and wrote, "No disrespect to these two but I’m not sure their contribution to movies qualifies them to be announcing Oscar nominees.” Priyanka came across the tweet and decided to respond in a really sassy manner.

Replying to the journalist, the actress asked him to share his 'thoughts on what qualifies someone' as a person to announce the nominations. She went on to post a video showing the films she has worked in. "Here are my 60+ film credentials for your adept consideration," added Priyanka. The video was a screen recording where you can see her scroll down a list that consisted of the names of the films that Priyanka has worked on.

Would love your thoughts on what qualifies someone. Here are my 60+ film credentials for your adept consideration @mrpford https://t.co/8TY2sw1dKb pic.twitter.com/T8DnQbtXZG

Earlier talking to a magazine, Priyanka has talked about how she reacts to online hate and said, “I am just like everyone else. In the morning when I’m driving to work or I’m having my coffee, I’m flipping through Twitter, Instagram, the news, and when my name pops up, I’m like, ‘Alright, what are people saying? How are we feeling?’ I just don’t react to it or let it affect my mental well-being." Priyanka Chopra Looks Ravishing in Monochrome Photoshoot for Elle UK’s March 2021 Issue.

Apart from this, Priyanka Chopra's film The White Tiger has been nominated for an Oscar in the Best Adapted Screenplay category. Expressing her excitement, Chopra tweeted, "We just got nominated for an Oscar! Congratulations Ramin and team #TheWhiteTiger. Somehow announcing the nomination myself made it so much more special. So so proud." The film also stars Rajkummar Rao and Adarsh Gourav in key roles.

(The above story first appeared on LatestLY on Mar 17, 2021 11:46 AM IST. For more news and updates on politics, world, sports, entertainment and lifestyle, log on to our website latestly.com).