Rapper Cardi B Files For Divorce From Husband Offset 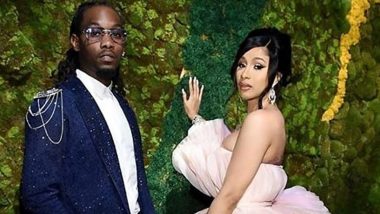 Cardi B and Offset are the popular American rappers. The former had started dating Offset in early 2017. The couple had gotten engaged on October 27 after Offset proposed Cardi B during the Power 99 Powerhouse concert that happened at the Wells Fargo Center in Philadelphia. The couple had secretly married in 2017. It was in early April 2018, on Saturday Night Live, Cardi B announced that she is pregnant with Offset’s child and in July 2018, the couple welcomed their first child. According to latest reports, Cardi B has filed for divorce from Offset. Cardi B Gets Raunchy on Offset’s Instagram as She Asks the Husband to Lick Her.

In December 2018, Cardi B had revealed via Instagram that all was not well between her and Offset and the two had broken up. She even shared that they later reunited and made several joint appearances at events. As per reports, Cardi B has not only filed for divorce from her husband, but even sought full custody of their daughter. Reports suggest that the 27-year-old singer filed divorce papers in family court in Fulton County, Georgia.

E! News reports states that Cardi B and her legal team called her three-year-old on-and-off marriage with Offset ‘irretrievably broken’. The report further states that it has also been cited in the court documents that “there are no prospects for a reconciliation”. An hearing is set for November 4, 2020.

(The above story first appeared on LatestLY on Sep 16, 2020 08:29 AM IST. For more news and updates on politics, world, sports, entertainment and lifestyle, log on to our website latestly.com).