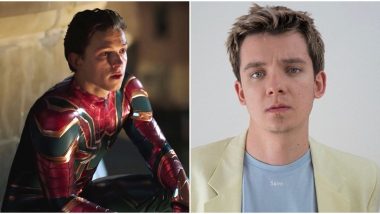 There has to be something special in Tom Holland that made Marvel reject tons of other auditions. While Tobey Maguire and Andrew Garfield had already donned Spider-Man's costume for Sony's different trilogies, Marvel was hunting for a new face, the one whom they will launch in their newly developed partnership with Sony Pictures. After conducting auditions and witnessing some fine talents, they eventually roped in Holland - a decision they'll never regret. However, Sex Education actor Asa Butterfield was quite disappointed on losing his dream role then. Tom Holland Makes a Surprise Appearance On Justin Bieber's Instagram Live Session As They Discuss Quarantine Life, Leave Fans Overjoyed (Watch Video).

Asa was among the many new faces who had auditioned to play your friendly neighbourhood spider-man. But Holland ultimately bagged the big role and today, years later, Asa finally opened up about how he felt then. In his recent interaction with Collider, he recalled his rejection by saying, "Every so often there’s a part [that you really want] and it’s a script you love, and you kind of put your heart and soul into it, and you don’t get it. And it is tough and it is shit, but I often find that something even better comes out of it at the end. And so in the case of Spider-Man, I did Sex Ed, because I wouldn’t have been able to do both of those at the same time."

While he was upset about his rejection, he was thrilled to realise how Holland did his part differently. "Tom did amazing things with Peter and he had an entirely different portrayal of him and I think it’s worked so well in the universe and in that part, and I don’t think I could do it. So I think all things work out in the end," he continued. Spider-Man 3: Charlie Cox's Matt Murdock aka Daredevil to Join Tom Holland in the Upcoming Sequel?

Besides Asa, Riverdale hunk KJ Apa had also auditioned for the same superhero role but got rejected. And of course, not bagging a role isn't the end of the world for them. There are plenty of more characters to play and if they're destined to don a costume, they will bag one ultimately.

(The above story first appeared on LatestLY on Jul 02, 2020 01:10 PM IST. For more news and updates on politics, world, sports, entertainment and lifestyle, log on to our website latestly.com).