Shang-Chi and the Legend of the Ten Rings Trailer: From Abomination to the Mandarin, 5 Hints We Got About Plot of Simu Liu's Marvel Movie (LatestLY Exclusive)

It’s great to see Marvel take a risk with such lesser-known characters because their obscure characters are ripe with some great character development and universe-building. Read on. 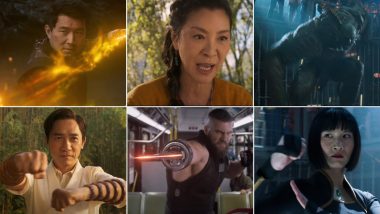 Shang-Chi and the Legend of the Ten Rings Trailer (Photo Credits: YouTube)

Shang-Chi is a relatively lesser-known Marvel character that has just recently had a spike in popularity ever since his film was announced. There are a lot of elements about the character that are being changed to fit the story of MCU, for example, The Mandarin was never really his father in the comic but rather for the movie it’s been changed to that. It’s great to see Marvel take a risk with such lesser-known characters because their obscure characters are ripe with some great character development and universe-building. Also seeing as to how this is going to be Marvel’s version of a Kung Fu film, it has us all the more excited. The second trailer featured some great cinematography and character reveal that hinted at the plot of the film, so here are five hints that we got from the recent trailer for Shang-Chi and the Legend of the Ten Rings.

It seems like we will be getting to see the history behind the Ten Rings and its organisation for the trailer opens up with a brief glimpse of a war taking place, and The Mandarin played by Tony Leung, using the Ten Rings in all its glory. The appearance of the Ten Rings also looks quite different from its comic counterpart, in the comics the Ten Rings just appear to be normal rings but over here they seem to be like bracelets. There is a popular theory running wild among the fans that the rings are that to be fitted on the fingers of a dragon, that’s why the unusual size of them.

With many scenes in the trailer taking place in the past, it seems like we will be seeing how Shang-Chi came to be the fighter that he is. The one that sticks out the most is his training with Death Dealer, it seems like they will be having some kind of rivalry in the film. Although the actor playing Death Dealer still remains to be a mystery, it does seem like he will bring some really chaotic energy to the fight scenes. Shang-Chi and the Legend of the Ten Rings First Look Poster Out! Simu Liu's Marvel Superhero Film To Release in Theatres on September 3.

Shang-Chi Being Tracked Down by The Mandarin

The Reveal of a Dragon

The trailer for Shang-Chi and the Legend of the Ten Rings also includes our titular hero meeting a dragon underwater. Now who the dragon still remains a mystery, but if earlier toy leaks are anything to go by, then it looks like it’s the Great Protector.

Shang-Chi and the Legend of the Ten Rings is slated to release on September 3, 2021.

(The above story first appeared on LatestLY on Jun 25, 2021 07:24 PM IST. For more news and updates on politics, world, sports, entertainment and lifestyle, log on to our website latestly.com).