The Northman is all set to release in theatres on April 22, 2022. It stars Alexander Skarsgard, Willem Dafoe, Ethan Hawke, Nicole Kidman, Anya Taylor-Joy, Bjork and Claes Bang. Here's all you need to know about the film. 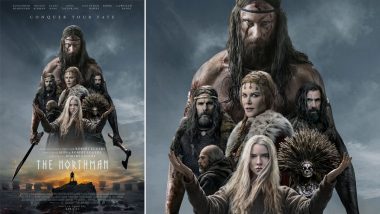 Robert Eggers' highly anticipated The Northman finally comes out in theatres this week and fans are extremely excited. This epic Viking revenge tale promises a violent and thrilling story that is bolstered by an extremely talented cast. Early promos for this film have made it look like an epic that will definitely deliver on its violent themes. The Northman Review: Early Reactions Call Alexander Skarsgard's Viking Film Brutal and Epic!

Alexander Skarsgard stars as Amleth, who is a Viking prince. He will be joined by Willem Dafoe, Ethan Hawke, Nicole Kidman, Anya Taylor-Joy, Bjork and Claes Bang.

The Northman is a Viking revenge tale that's based on the legend of Amleth. It focuses on Amleth getting revenge for the brutal murder of his father.

Watch The Trailer For The Northman

The Northman releases in United States of America on April 22, 2022.

The review for The Northman isn't out yet. The moment it is, the page will be updated.

(The above story first appeared on LatestLY on Apr 18, 2022 03:04 PM IST. For more news and updates on politics, world, sports, entertainment and lifestyle, log on to our website latestly.com).