The White Tiger is a film written and directed by Ramin Bahrani, and is an adaptation of Arvind Adiga's Booker prize winning book by the same name. The movie stars Adarsh Gourav, Rajkummar Rao and Priyanka Chopra Jonas. The White Tiger is streaming on Netflix. 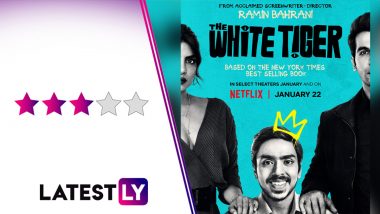 The White Tiger Movie Review: Balram Halwai (Adarsh Gourav) is the eponymous 'White Tiger' in American filmmaker Ramin Bahrani's adaptation of author Aravind Adiga's Booker Prize winning book. It is a school inspector who gave him that epithet - a rare animal that comes once in a generation to rule the forest. Why? 'Cos kid Balram could speak good English when the rest of his fellow students couldn't. Yes, knowing the Queen's language is enough to get you ahead as per one of film's sardonical principles. The White Tiger Review: Priyanka Chopra Jonas, Rajkummar Rao and Adarsh Gourav’s Film 'Roars' As Per The Critics.

But is English enough for Balram, one of millions of the poor residing in India and waiting to get their freedom from their social imprisonment? In his words, people like Balram are trapped in a 'rooster coop' - they are self-controlled by their own sense of slave mentality and grudging subservience to the master culture.

Interestingly, when Balram begins narrating his life-story in an email to the then visiting Chinese premier Wen Jiabao (the movie's main events are set between 2007-10), we know that he has escaped his coop. We already know the ending to his success story, we only need to know how he reached there. Again, in his own words, how he earned his belly.

Balram, whose schooling is left abandoned over his family's miserable condition, hails from Laxmangarh, a hamlet nearing coal mines, that is ruled by poverty, and further exploited by the rich men who runs the mines. One of them is The Stork (Mahesh Manjrekar), whose eldest son The Mongoose (Vijay Maurya) is equally haughty and cruel as his father.

Then one day, The Stork brings his younger son Mr Ashok (Rajkummar Rao) to the village. It is admiration at first sight for Balram, working at a tea-stall then, for this US-returned man. Balram wants to be his driver and he gets the job when he goes to Dhanbad to their house. While he despises Stork and Mongoose's deprecation towards him, Balram adores Mr Ashok and his NRI wife Pinky (Priyanka Chopra Jonas). Their liberal values make them affable masters to Balram, though a road accident damages his servile attitude towards them.

While I am not a fawning admirer of Adiga's acclaimed novel, it is darkly humorous, and has a scathing opinion on caste politics and social divide ruling the country. Bahrani's adaptation is, more or less, a faithful adaptation of the source, even cleverly using the narrative device (which actually made the book a difficult one to adapt). It retains the dark humour and the bleak commentary. The White Tiger revels in its nihilistic nature, takes potshots at our inherent slave mentality and offers enough glimpses as to why socialism is a nearly extinct idea in this country.

At the same time, it tempers down the caste troubles (inclining more towards class divide) and nullifies the criticisms towards religion that persisted in the book. Also, The White Tiger is riddled with cliches that Western audience perceives of Indian cinema. Stray cows on the road - check. Frequent glimpses of Mahatma Gandhi's statues - Check. Glimpses of the poor sleeping on pavements, even in areas they are not supposed to be seen - check. While The White Tiger is seen as a paradox to the hopeful tone of Slumdog Millionaire, both share the same 'white' pandering, ironically, a trope that is also taken a dig at in the film.

Another big change, and somewhat positive too, is the movie's expansion of the character of Pinky. In the book, she was a minor character who was involved in a major event. In the movie, she kind of becomes the voice of conscience, an outsider who is horrified at her in-law's treatment of her driver, and at their irritation on hearing her speak in front of them. Priyanka, even though her screentime is brief, brings a strong resilience in her role, which the film misses after her departure, suffering from slow-pacing and even some of its sharp humour. The White Tiger: Nick Jonas Reviews Wifey Priyanka Chopra’s Netflix Film; Calls It 'Unreal' and Hails PeeCee as 'Exceptional'!

Of course, the main focus of The White Tiger is the relationship between Balram and his 'master'. While he refuses to divulge the original names of the 'Stork' and the 'Mongoose', he has no qualms in revealing Ashok's name in the start itself. Ashok's liberal values makes him 'soft' in the eyes of Balram's eyes, who later finds the animal to call him - the 'Lamb'. Guess you know how that would end for Mr Ashok.

Sure, we don't really need a few reels more for Balram to realise that Mr Ashok's liberalism is as consistent as Rao's dodgy accent. He might grumble about the corruption and lack of socialist values in the country, which doesn't stop him from indulging in the loopholes himself.

But then, Balram himself is not a clean man. He might be a victim of the country's step-motherly treatment towards the ill-fated, but Balram himself shows the same derision towards the lesser fortunate that his masters show to him. Or maybe he has learnt the ropes of this dog-eat-dog world. With Adarsh Gaurav's excellent performance, Balram becomes a compelling reason to stick with The White Tiger till the very end to see how he gets his Roar.

Among the supporting cast, Kamlesh Gill stands out as Balram's controlling grandmother, while Mahesh Manjrekar and Vijay Maurya are menacing enough.

- The Scathing Commentary on Social Divide

While it stays away from the more controversial commentaries of the book, The White Tiger is a very faithful remake of Arvind Adiga's best-seller, emboldened by Adarsh Gourav's fantastic performance. The White Tiger is streaming on Netflix.

(The above story first appeared on LatestLY on Jan 22, 2021 06:03 PM IST. For more news and updates on politics, world, sports, entertainment and lifestyle, log on to our website latestly.com).