Tom Holland's upcoming projects include Spider-Man: No Way Home, and Uncharted. Earlier this year, Holland appeared in the Apple TV+ movie Cherry, that was directed by the Russo bros, and the much delayed sci-fi adventure film, Chaos Walking. 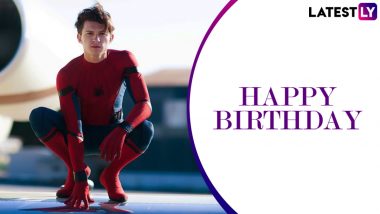 Tom Holland won everyone’s hearts when he made his debut as Spider-Man in the Marvel Cinematic Universe. Relatively just  promising upcoming actor waiting for stardom to knock the door before he earned all-appealing fandom, Holland appeared in films like The Impossible, which garnered him acclaim for his acting and made him win several awards as well. The Devil All The Time Movie Review: Tom Holland, Robert Pattinson Embrace the Darkness in This Disturbing Netflix Drama That’s Not for the Faint-Hearted!

In 2015 his “life was flipped upside down”, as Tom later tweeted for he was cast as Spider-Man in Captain America: Civil War. He has been this generation's Spider-Man now since 2016 and has appeared as the character in five films, two of which were Spider-Man standalones, with a third on the way in December. Tom Holland Birthday Special: Workout And Diet That Keep 'Spider-Man' Shredded.

His portrayal of Peter Parker has become quite iconic over the years, with many calling it the best wall crawler in live-action. So to celebrate Holland’s 25th birthday, we are taking a look at five of his best moments as Spider-Man.

This is a perfect scene to establish a teenager Spider-Man in the universe, the first few minutes of Homecoming are brilliant in doing that. Flunking his school midway through Peter quickly goes into an alleyway and changes into his suit. We are quickly then met by a hilarious montage of him helping people out in the neighborhood while "Blitzkrieg Bop" by The Ramones plays in the background. It really hammers into the friendly neighborhood aspect of Spider-Man from the comics.

Him vs Bucky and Falcon (Captain America: Civil War)

After making kind of an awkward first impression at the airport, Spidey is quickly thrown into battle with Falcon and The Winter Soldier. It’s over here that Holland truly shows what he brings to the table as Spider-Man, throwing incessant quips during the battle. It’s a great action scene in general that will leave any Spider-Man fan grinning. Avengers: EndGame: Confused by All the Time-Travel in Marvel’s Superhero Film? Explaining What Really Happened in Layman Terms.

In a scene that basically haunted all Marvel fans in the cinema, Thanos finally succeeds in snapping away half of the universe and the viewers are forced to watch as their favorite heroes turn into dust. The one death that hits hardest in the film though is of Peter. It’s made worse that he already gets to know about his fate, as you slowly see him disintegrate into the air while Tony embraces him. The scene is so effective due to Holland’s amazing acting in it, and it’s easily one of his best and most heartbreaking moments in the Marvel Cinematic Universe.

Forced to leave his prom party, Peter is immediately in pursuit of Adrian Toomes aka The Vulture. He tracks him down to his hideout where both have a small altercation and Spider-Man is immediately overpowered and trapped inside the rubble. The special thing about this scene is how it pays homage to one of Spider-Man’s most iconic comic panels, where he is in a similar situation and has to show incredible amounts of strength in order to save himself and then save the day. Homecoming executes this particular scene perfectly, and is a glowing moment for Holland’s Spider-Man.

In his final face off against Mysterio, Spider-Man quickly finds himself to be outnumbered by his drones. To trick him they change his surroundings to be completely pitch black so he can’t see anything. It’s in this moment that Peter closes his eyes and finally makes use of his Spider-Sense or so the MCU calls it the “Peter Tingle”. We are then met with one of Spider-Man’s best action scenes as he tears through the drones like they are nothing and finally captures and outsmarts Mysterio.

Tom Holland's upcoming projects include Spider-Man: No Way Home, and Uncharted. Earlier this year, Holland appeared in the Apple TV+ movie Cherry, that was directed by the Russo bros, and the much delayed sci-fi adventure film, Chaos Walking.

(The above story first appeared on LatestLY on Jun 01, 2021 09:21 AM IST. For more news and updates on politics, world, sports, entertainment and lifestyle, log on to our website latestly.com).