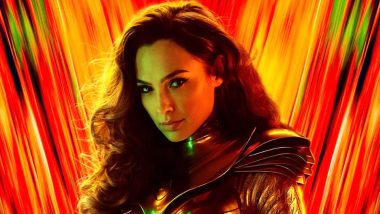 Actress Gal Gadot has teased potential romance between her superhero avatar of Wonder Woman and actress Kristen Wiig's supervillain Cheetah in the upcoming "Wonder Woman 1984". In an interview with SFX Magazine, Gadot and Wiig opened up about their upcoming movie, and their thoughts on fan theories about the relationship between their characters, reports dailymail.co.uk. Wonder Woman 1984: Gal Gadot Strikes a Stunning Power Pose in Her Superhero Avatar on New Magazine Cover (View Pic)

Asked whether Diana Prince (Wonder Woman) and Barbara Ann Minerva (Cheetah) were on a date during a scene that appeared in the trailer, Wiig questioned: "Oh, for a lesbian thing?" Gadot then teased: "The sexual tension is always there, I can tell you that!" The Cheetah is one of Wonder Woman's most iconic enemies in the DC comics, but the pair have not embarked on a romance in the original work. Wonder Woman 1984: Patty Jenkins Explains Why Gal Gadot Starrer Has Two Villains.

A new battle, a new armour, new villains, edgier action and a reunion with her long-last love -- Gadot has teased the beginning of a "new era of wonder" with the much-awaited "Wonder Woman 1984". Gadot is reprising her role as Diana Prince, aka Wonder Woman, in the sequel of the megahit 2017 DC film. In the trailer of Patty Jenkins' project, Wonder Woman is seen wearing a shinier version of her armour and flaunts her fighting skills with her golden Lasso of Truth.

Other returning stars include Chris Pine as Steve Trevor (Wonder Woman's love interest), Robin Wright as Antiope and Connie Nielsen as Hippolyta. It also stars Pedrol Pascal as Max Lord. The Warner Bros. project is expected to release on August 14.

(The above story first appeared on LatestLY on May 31, 2020 03:00 PM IST. For more news and updates on politics, world, sports, entertainment and lifestyle, log on to our website latestly.com).