Priyanka Chopra Opens Up About Her Quarantine Period With Hubby Nick Jonas, Jokingly Says ‘We Still Like Each Other’

Priyanka Chopra graced The Late Show with Stephen Colbert wherein she talked about her latest movie 'The White Tiger' and also spilt beans about her lockdown time with Nick Jonas. You cannot miss this one. Check it out. 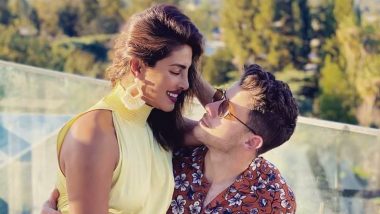 Priyanka Chopra Jonas is not just a celebrity, she's an inspiration to many women out there who wants to achieve heights in the showbiz. In the past couple of years, we've seen the actress growing holistically and we feel proud. Currently, she's busy promoting her Netflix film The White Tiger which has been receiving a roaring response from critics and audiences alike. Recently, as part of the promotions, PeeCee also made an appearance on The Late Show with Stephen Colbert wherein she talked about her movie and also spilt beans about her lockdown time with hubby Nick Jonas. The White Tiger: Nick Jonas Reviews Wifey Priyanka Chopra’s Netflix Film; Calls It 'Unreal' and Hails PeeCee as 'Exceptional'!

As the host, Stephen quizzed about her 'lockdown marriage', she jokingly replied, “It’s good. We still like each other."  Aww, we cannot get over her smart answers. "Also, I think with our individual careers, I don’t think we would have spent six months with each other ever. So, that was really a blessing, and I am happy to be able to have that time with each other," she added further. The White Tiger Movie Review: Priyanka Chopra-Rajkummar Rao’s Netflix Film Draws Its Strength From Its Nihilism and Adarsh Gourav’s Ferocious Performance (LatestLY Exclusive).

Recently, Nick was awestruck after watching Priyanka's The White Tiger and had also tagged her performance as 'exceptional'. Just like a doting wife, PeeCee in return also had thanked hubby for all the love and appreciation via an Instagram post.

During the conversation with Stephen Colbert. Priyanka also shared her feeling on seeing Kamala Harris as the Vice President of the USA. She said, “It was such an emotional moment for a lot of my friends and family but coming from a country like India which has seen several women in governance, from Prime Minister to Presidents…I would say, welcome to the club America. This is what governance should look like, and leadership looks amazing especially when it is diverse and is reflective of what the world really looks like.” Stay tuned!

(The above story first appeared on LatestLY on Jan 23, 2021 11:19 AM IST. For more news and updates on politics, world, sports, entertainment and lifestyle, log on to our website latestly.com).