'Radhe' Baddie Sangay Tsheltrim: Wanted To Get Punched By Salman Khan, But Ended Up Bagging A Film With Him! (LatestLY Exclusive)

The ex-Army officer-turned-bodybuilder-turned-model Sangay bagged an opportunity that looks like a dream indeed. A chance encounter with Bhai led to a cup of coffee with him, which eventually helped Sangay bag one of the biggest films of 2021! 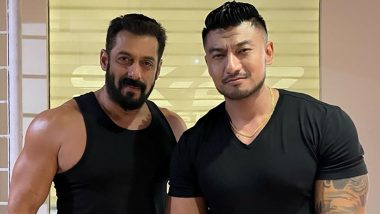 Actor Sangay Tsheltrim who made his Bollywood debut with the Salman Khan starrer Radhe is on cloud nine.  The ex-Army officer-turned-bodybuilder- turned model Sangay bagged an opportunity that looks like a dream indeed. "Right now I am on cloud nine. I am very excited to be a part of the film and officially enter Bollywood". He continued, "Like any other fan, I went to meet Salman sir at one of his shoots. I met him through my friend.  Luckily, Salman sir was free then and no one was around him. I got a chance to sit down with him and have a cup of coffee. We chatted for a while, as we had a lot of common topics to talk about such as fitness and bodybuilding."

That Sangay has a physique that makes him stand out is a given, but what other qualities apart from his striking presence caught Salman's interest, we wondered. "I think, that is a special thing about Salman sir. He comprehends your potential the moment you meet him. I don't know maybe looking at my physique or my army background he must have cast me for the film. But I have never even imagined in my dreams that I will be a part of a project like this one! I used to jokingly tell my friends, get me a role in Salman sir's film, where I can get a punch from him. Bagging the role as one of the main antagonists is something I had never even imagined"

This rare opportunity with the country's biggest superstar should open the doors of opportunities for him. So what's his next move? "When I got this opportunity and when I came to Mumbai saw the strugglers out there and when I mingled a bit in the atmosphere of B-Town. I asked myself why not capitalize on it in the correct way and make use of the opportunity?  that's the reason why I did not go back to my native land Bhutan and stayed back till Radhe's release." Watch Radhe Online: Here’s How You Can Watch Salman Khan-Disha Patani’s Film on ZEEPlex From the Comfort of Your Home!

Has his newfound celebrity status changed his family's or his friends' perspective towards him, we quizzed. "Definitely not, back there in Bhutan I already am a fitness icon and I have done a couple of films there but for me, I don't consider myself an actor or a celebrity. I am always a soldier. But I had to give up my profession to pursue my passion which is to bag a gold medal for my country. I was never very ambitious about acting."

Radhe has bagged mixed reviews with most critics not saying favorable things about the movie. How does Sangay react to this criticism? "For me, negative reviews do not matter. And for Salman sir also it won't matter. He is such a big star and not everybody will love him, but that won't make any difference to him. I am not bothered about the negative comments at all." Radhe Movie Review: Salman Khan and Disha Patani’s Tone-Deaf Remake of The Outlaws Is Terribly Dated! (LatestLY Exclusive)

Is there any quality that this tough man discovered about Salman Khan while working with him, something unique that no one knows about Bhai.

"He (Salman) is a very hardworking person. Me despite being an army officer, I like to relax but Salman sir still works very hard in the gym. I get tired by merely looking at him doing his workout. The kind of determination he puts in is what most people don't know about him. And he is a very kind person. He takes care of people who work with him. I am an outsider, I am from Bhutan but still, I was looked after by SKF and Salman sir which I did not even expect. They went beyond and gave me VIP treatment, and I am very grateful. I am an outsider and for me, it felt like home." he recalled.

How does the ex-military officer see his journey from here on, we asked. "Whatever excites me and if I get a good project so I'll surely take it up. Or else I have a couple of projects back in Bhutan and I am also a producer in Bhutan. And I have a special movie that I want to give my country that is my entry into Bollywood"

We are sure there must be something the real heroes, the military guys poses something that our on-screen heroes don't. Sangay responds to that statement with a hint of a smile. "I would not want to compare and I have huge respect for everyone. I am very much still a soldier who wanted to bring a gold medal for his country, which I made sure I did and good skills and aptitude is what I possess but I don't know about other actors" concluded Sangay.

(The above story first appeared on LatestLY on May 14, 2021 06:43 PM IST. For more news and updates on politics, world, sports, entertainment and lifestyle, log on to our website latestly.com).