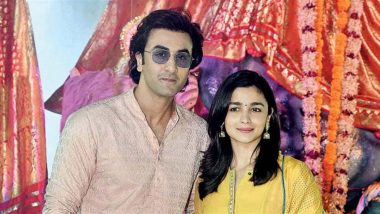 Ranbir and Alia are not keen on signing any films together

We can't wait to see Alia Bhatt and Ranbir Kapoor together on the big screen. The two are starring in Ayan Mukerji's Brahmastra, which has gone through a lot of changes in terms of its release date. The waiting game is killing us and their fans can feel us, we are sure. Other producers are sort of excited too for they have been keen on casting them together without even seeing the film, a Times Of India report states. However, Ranbir and Alia, who as we all know are dating IRL are not ready to sign any film together before the release of Brahmastra, which will be in 2020.

A source informed the portal that the couple wants to see how the audience's reaction to their on-screen pairing and chemistry in Brahmastra, which is why they are not taking any projects together, even though they have a couple of offers right now. So Brahmastra is sort of a litmus test, according to Alia and Ranbir. Alia Bhatt Plans a Big 'Combined Party' for Ranbir Kapoor's Birthday?

“Although producers are approaching Ranbir and Alia for their projects, they are not keen on taking up projects before the release of Ayan Mukerjee's 'Brahmastra'. As the couple want to see how the film and their on-screen chemistry is being received by the audiences," the source was quoted. Well, it's fair honestly. One never knows how the viewers will react to the film, till then it's better for them to sign another film together, even if it has a good storyline.

While we are talking about Brahmastra, the film, which is being produced by Dharma Productions was earlier scheduled to release in December 2019. But the VFX team of the film needed more time to get it right and hence it is now pushed to 2020. Apart from Ranbir and Alia, Brahmastra will also feature Amitabh Bachchan, Dimple Kapadia, Nagarjuna Akkineni and Mouni Roy.

(The above story first appeared on LatestLY on Sep 21, 2019 09:25 AM IST. For more news and updates on politics, world, sports, entertainment and lifestyle, log on to our website latestly.com).