We gather that even if Saif Ali Khan's character in Tandav seems to be right-winged with his political ambition, but his persona is modeled on Rahul Gandhi. With Dimple Kapadia playing the powerful political supremo and Saif's mother in this one, it is apparent that her character seems to have been modelled on none other than Sonia Gandhi. 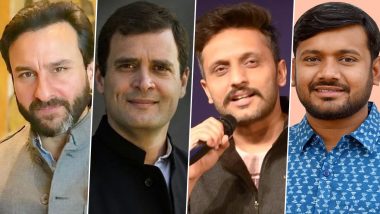 We are eagerly waiting for Saif Ali Khan's highly charged political drama Tandav. The much-awaited web series is high on thrills, manipulations and maneuvering. From the chest-thumping bravado of political parties to excessive nationalism and from the lethargy of governance to the dirtiness of beurocracy, Tandav promises to showcase everything that entails an interesting watch. Add to that the current topic that has galvanized the entire nation and Tandav becomes ragingly political.

Yes, the drama also focuses on the farmer protests and the right to dissent. And now we hear that even if Saif Ali Khan's character seems to be right-winged with his political ambition, his persona is modeled on Rahul Gandhi. With Dimple Kapadia playing the powerful political supremo and Saif's mother in this one, it is apparent that her character seems to have been modelled on none other than Sonia Gandhi. Tandav Song Dhakka Laga Bukka: AR Rahman’s Song From The Film Yuva Now Becomes A Youth Anthem For Saif Ali Khan’s Web Series! (Watch Video)

With that being said, Zeeshan Ayyub is playing an angry youth who unleashes his fiery word prowess on the college campus, no wonder one can see undeniable shades of Kanhaiya Kumar in him. The trailer also shows how his character is employed as a pawn to fuel his ambition for him to come to the forefront, but that move also drives an agenda of sorts against the ruling party in this narrative.Saif Ali Khan: The Shades of Cinema Are Changing and It Is the Right Time to Be an Actor

Talking about his character in Tandav Zeeshan said in an interview that he revisited his real-life college days while shooting for the film. “I re-lived my college days with Tandav. We shot a lot of college sequences in the same college and hostel where I studied (Delhi University North Campus). College days are the building blocks of your life you can’t easily forget. You spend lots of time on the college campus with friends, free of all worries and problems, just having fun and not realizing how many memories you’re making in the process. And that’s what Tandav did for me."

(The above story first appeared on LatestLY on Jan 13, 2021 03:19 PM IST. For more news and updates on politics, world, sports, entertainment and lifestyle, log on to our website latestly.com).