12th Man features an ensemble cast with Mohanlal in the leading role. Ahead of its premiere, let’s take a look at some of the details of this Malayalam film. 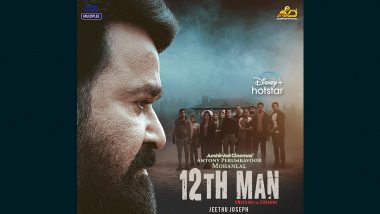 Mohanlal has an intriguing line up of films and one among them is the upcoming mystery thriller 12th Man. The Malayalam film helmed by Jeethu Joseph have already grabbed audiences attention with the intriguing posters, trailer and teaser videos. The filmmaker is known to deliver hit crime thrillers in the past and hence movie buffs have high expectations from the 12th Man too. 12th Man Trailer: Drishyam Duo of Mohanlal and Jeethu Joseph Is Back to Treat Fans with an Intriguing Thriller (Watch Video).

12th Man would not be releasing in theatres, but directly premiere on the OTT platform. Ahead of its premiere, let’s take a look at some of the details of this Malayalam film.

Plot – 12 individuals are invited to a gathering and they all are meeting each other after a long time. They are invited to a party that is set up in a hilly region. Lives of these people changes when all end up becoming suspects of a murder.

Watch The Trailer Of 12th Man Below:

Streaming Date – Mohanlal’s film 12th Man was released on Disney+ Hotstar on May 20.

(The above story first appeared on LatestLY on May 17, 2022 01:54 PM IST. For more news and updates on politics, world, sports, entertainment and lifestyle, log on to our website latestly.com).