Aarkkariyam is a Malayalam film that is directed by Sanu John Varghese, who has also co-written the screenplay. The movie stars Biju Menon, Parvathy Thiruvothu and Sharaf U Dheen. Aarkkariyam, released in theatres on April 1, 2021, is now streaming on Amazon Prime Video. 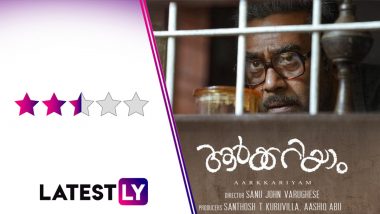 Aarkkariyam Movie Review: Aarkkariyam in English means Who Knows?. Maybe a perfect phrase for what we are going through during a pandemic that refuses to quit, with both the government and the public clueless as to how to keep it in check. I am not being political here, for cinematographer Sanu John Varghese's debut directorial is set during the first wave of COVID-19 pandemic, as the country finds itself in a strange situation of facing an invisible enemy and sees unprecedented strategies like nation-wide lockdown in 2020. Watching Virus in the Times of COVID-19: 7 Lessons the Entire Nation Can Learn From Aashiq Abu’s Malayalam Medical Thriller.

Aarkkariyam focuses on three principal characters - Shirley (Parvathy Thiruvothu), Roy (Sharaf U Dheen) and Ittyvira (Biju Menon). Shirley and Roy are married and settled in Mumbai, with their kid in a boarding school in Kerala. We learn later that this is a second marriage for both of them, and the kid is Shiley's daughetr from her first marriage.

Ittyvira (Biju Menon), whom the couple calls 'Chaachan', is Shirley's widower father, an irritable but amiable man who lives in his ancestral house in Kerala. Shirley and Roy travel to her house as COVID-19 starts its purge in the country and India is looking towards a lockdown. Shirley wants to bring her daughter from the boarding school. Roy is facing problems in his business. for which he is in need of urgent money.

Ittyvira, understanding Roy's problems, proposes to sell his house and land. But before that, he drop a secret so dark on Roy that the latter loses his peace of mind since then.

Aarkkariyyam is a slow-burn drama that paces itself leisurely in the first half before dropping that big twist all of a sudden. The characters are nicely established, and so are their problems. The COVID-19 situation, while giving a backdrop to why the plotline has arised, doesn't impose too much on the main narrative. Though the pacing is relaxed, I didn't feel that sense of urgency that would have made me restless. It helps that there are some really lovely locales where the film is shot (Idukki), whose serenity unwittingly becomes a facade to a crime that it has hidden for years.

The three main characters are all decent people, who are progressive in their outlooks (the movie never makes much of a deal about their second marriage and only does for a crucial plot element), which also includes Ittyvira. Ayyappanum Koshiyum Movie Review: Prithviraj Sukumaran and Biju Menon Starrer Is A Mass Entertainer, Say Twitterati!

Even Roy's money problems feel more concerning through his friend (Saiju Kurup) rather than him bringing the tension to his surroundings. The only cause of worry for me as a viewer in the first half is to see how people are wearing masks in the film, some only covering their mouths, others not wearing at all. It reflects how clueless the people were about the disease for whom the mask felt more of a formality than a precaution. However, even the virus was more of a lurking enemy in the film who just creates havoc in the sidelines rather than come to the spotlight. The real foe here is guilt, and that happens with Chaachan's sudden confession to Roy.

I was eagerly anticipating how Roy, an otherwise nice fellow, would behave after this. The burden of the secret lying heavily on his mind, Roy couldn't even share it with his wife. The exploration of sharing a guilt for a crime he never even committed is done in the second half, as Roy tries to find venues to justify what he is doing (and hiding) isn't unjustifiable.

While I loved what Aarkkariyam wants to do with Roy's moral crisis, here's where the pacing comes a huge problem. After that interval twist, just when our interest has been piqued to a great level, the second half sees a downward drip that it only occasionally recovers from. I could see the writing, like Roy's conscience, struggling in these portions.

I felt the impact is severely restrained despite the potential that the revelation could have taken the narrative to in some very interesting directions. Like how one person can be seen in different perspectives by different individuals. Or how one deed can make a person see someone he or she knows for a long time in a different light altogether. There are potentially nice ideas that Aarkkariyam touches upon but doesn't get deeply into. I wanted the movie to go on third gear at least in the second half, but it was happy cruising on the first gear.

I might have liked the way the twist is subtly inserted in the narrative, but on retrospection, couldn't really digest the manner in which Chaachan drops it on an ignorant Roy out of the blue. It presents the idea that there is a sense of coldness in Ittyvira that no one knew, though later the film presents it the way that he has done it out of anguish and desperation.

Even in the weaker portions, the performances of Aarkkariyam stays with you for long. Especially Biju Menon, who is truly superb as the gerariatic who shifts the burden of his conscience to the person he knows won't hurt his daughter. Be it how he modulates his body language or the subtle expressions that lingers on his face, Menon delivers a class act here. Ittyvira ranks among the actor's finest performances, which is just too many. Sharaf U Dheen is quite nice as the morally upright son-in-law, though the movie keeps his restrained throughout.

A little disappointment comes where Parvathy is concerned, not with her performance which is good as always, but with her character. She take more of a secondary place in the main plotline, more of an oblivious onlooker who doesn't have much to add in when things really kick in.

- A Decent First Half With A Shocking Mid-Film Twist

- A Wavering Second Half

The performances and some of its ideas make Aarkkariyam a decent one-time watch, but the disappointment comes from the realisation that it had potential to be more. Aarkkariyam, released in theatres on April 1, 2021, is now streaming on Amazon Prime Video and Neestream.

(The above story first appeared on LatestLY on May 19, 2021 05:37 PM IST. For more news and updates on politics, world, sports, entertainment and lifestyle, log on to our website latestly.com).