Prabhas fans are currently going berserk over his new announcement which came on the early morning of August 18. 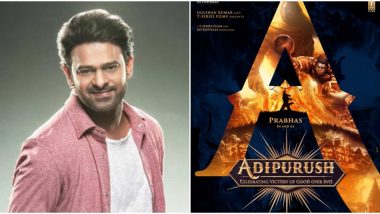 Prabhas is on a signing spree and his announcements are only getting grander with time. After starring in SS Rajamouli's great epic, Baahubali, the actor preferred being a part of suave actioner in Saaho. He later signed a soft-hearted love story with Radhe Shyam and has Nag Ashwin's next with Deepika Padukone. However, to make things more interesting, the actor went ahead and signed Tanhaji director, Om Raut's next outing, Adipirush based on Ramayana. While more details on the same are awaited, we are glad to see this collaboration happening and so are the actor's fans. Adipurush: Prabhas' Next Film Is With Om Raut And It's A 3D Epic Action Drama (Read Details).

Prabhas fans are currently going berserk over his new announcement which came on the early morning of August 18. The shooting of this epic 3D action drama will start only after Prabhas wraps his previous commitments. The movie backed by Bhushan Kumar's T Series will be mounted on a huge scale and this would also mark his second-period outing after Rajamouli's magnum opus. Prabhas fans are certainly celebrating the occasion and their happy reactions can be found below. Adipurush: Prabhas To Play The Titular Role In Om Raut’s Next Film, Actor Shares The Poster Of The 3D Action-Drama On Instagram (View Pic).

Om Raut's Next Will Be Bigger than Tanhaji

Celebrating victory of good over evil.#Prabhas in and as #Adipurush

Kannada Fans Have a Special Reason to Rejoice

This time in Kannada too!#Adipurush 🤩

The Announcement that Made Your Day

After Baahubali, Another Period Drama for Prabhas

After #Baahubali, #Prabhas in an epic character again, based on the most popular chapter of Indian culture#Prabhas22, 2022 release. Shoot to begin in 2021👍 pic.twitter.com/enPLRJbz0Q

Prabhas as Ram in Ramayana

The Truest Form of Reaction

The shooting of Adipurush is expected to begin in 2021 and the film will be released in 2022. The filmmaker is currently busy locking down the script and getting other things in order which also includes finalising his leading lady. Who do you think should star in this period drama with Prabhas? Should he collaborate with Anushka Shetty once again? Do drop in your suggestions by tweeting us @latestly.

(The above story first appeared on LatestLY on Aug 18, 2020 07:45 AM IST. For more news and updates on politics, world, sports, entertainment and lifestyle, log on to our website latestly.com).