C U Soon is an experimental thriller directed by Mahesh Narayanan and it has turned out to be a perfect watch. Starring Fahadh Faasil, Roshan Mathew and Darshana Rajendran in the lead, critics are all praises for this Malayalam movie. 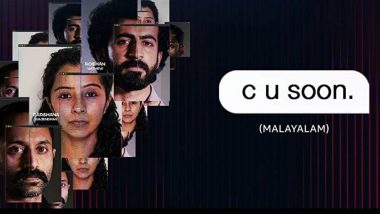 This Onam has turned out to be extremely special for movie buffs, especially the ones who Malayalam Cinema. There are several new films that have been released during this auspicious occasion and one among them is C U Soon. It is an experimental thriller directed by Mahesh Narayanan and it has turned out to be a perfect watch. Starring Fahadh Faasil, Roshan Mathew and Darshana Rajendran in the lead, critics have not only lauded about their performances but also about the gripping narrative. C U Soon Movie Review: Fahadh Faasil, Darshana Rajendran, Roshan Mathew Excel in This Experimental Thriller That Exposes a Horrifying Social Crime.

C U Soon has released on Amazon Prime Video on September 1. This was one of the most-anticipated films during this lockdown period as it was shot with limited resource but the technology has been utilised well. Let’s take a look at the reviews shared by critics on the Malayalam movie C U Soon. C U Soon Trailer: Fahadh Faasil, Roshan Mathew's Next is a Taut Thriller that Won't Disappoint (Watch Video).

Times of India – C U Soon is a great example of making innovative content, utilising technology and fine storytelling, at a time when budgetary constraints and physical restrictions are forcing filmmakers to think out-of-the-box. For Mollywood’s first film that was made especially for an OTT release and experience, the film sets the bar high.

The News Minute – Despite the momentary distractions, Mahesh Narayanan, who wrote and directed the film, manages to tell an engaging story, taking all your attention to the happenings on the screens. It is the first such film in Malayalam and is now streaming on Amazon Prime Video.

The Indian Express – Producers Fahad Faasil and Nazriya Nazim, and director Mahesh Narayanan pick up a story with disturbingly familiar outlines and impart it with fresh urgency and impact, making each frame of the 1 hour 38 minutes run time count.

NDTV – C U Soon, frisky in pace but grounded in unwavering technique, is an affirmation of cinema's capacity to be creative and hopeful no matter how grave and protracted a crisis is. The film has been made so that some Malayalam movie industry hands can return to work and earn their wages in these trying times.

Mashable India – C U Soon is an absolute masterclass in terms of editing and acting. Mahesh Narayanan takes a simple love story between a banker named Jimmy Kurian (Roshan Mathew) and Anu (Darshana Rajendran) that goes sideways and his cousin Kevin’s (Fahadh Faasil) efforts to piece together what actually went down. And then he expertly adds layers upon layers onto the narrative in an attempt to start a conversation about how technology is both bringing us together and alienating us.

Watch The Trailer Of C U Soon Below:

This is what the critics had to say about C U Soon that is currently streaming on Amazon Prime Video! Stay tuned for more updates from the world of entertainment.

(The above story first appeared on LatestLY on Sep 01, 2020 11:16 AM IST. For more news and updates on politics, world, sports, entertainment and lifestyle, log on to our website latestly.com).