Dhanush Birthday: From Acting, Singing to Directing, Here’s How D Has Progressed Steadily Through His Career 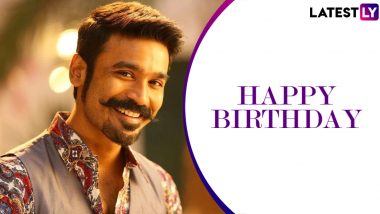 Dhanush, who is also fondly called as D, is one of the finest talents of Kollywood. He is an all-rounder who has excelled in every role, be it any genre. From being a brilliant actor to a sensational singer to a perfect director and much more, Dhanush has progressed steadily through his career. The actor of Tamil Cinema, who celebrates his 37th birthday on July 28, 2020, has won hearts over the years with his sheer talent. His efforts have paid-off and today he is one of the most loved actors of Kollywood. 17 Years of Kaadhal Kondein! Dhanush Thanks His Brother, Director Selvaraghavan For The Cult Classic.

Dhanush has acted in more than 40 films in his career. He has also managed to bag a National Film Award for Best Actor for playing the role of a rooster fight jockey in Aadukalam. Dhanush has broken barriers to emerge as one of the most successful and most loved actors of Kollywood. On the occasion of Dhanush’s birthday, let’s take a look at his journey in the world of cinema. Atrangi Re: New Still of Dhanush and Sara Ali Khan Hits the Internet; Shooting of Aanand L Rai’s Film to Resume in October 2020.

At the age of 19, Dhanush had made his debut as an actor with the film Thulluvadho Ilamai. But over a period of time, he bagged some of the most power-packed roles with films such as Polladhavan, Yaaradi Nee Mohini, Kodi, Asuran, among others. Dhanush was criticised for his looks, but director Kasthuri Raja’s son knew that script matters more than looks. And today, Dhanush is in the A-list star category of Tamil Cinema.

Besides being known for brilliant acting skills, Dhanush is also known to be a sensational singer. The track “Why this Kolaveri Di” from the film 3 had shattered all records. It was in 2004 with the film Pudhukottaiyilirundhu Saravanan, Dhanush was introduced as a playback singer by composer Yuvan Shankar Raja. Dhanush has also penned lyrics for songs from the films such as 3, Velaiilla Pattadhari, Maari, Kodi, among others.

Dhanush had made his directorial debut with the film Pa Paandi that released in April 2017. Featuring Rajkiran in the lead and Revathi, Prasanna and Chaya Singh in supporting roles, this comedy drama was a huge hit at the box office.

Dhanush has produced numerous films under his home banner Wunderbar Films. This production company has been established by him along with his wife Aishwarya. Some of the films produced under this banner are 3, Shamitabh, Naanum Rowdydhaan, Pa Paandi, VIP 2, among others.

Dhanush had made his Bollywood debut with Aanand L Rai’s film Raanjhanaa in 2013. Two year later, he was seen in Shamitabh that was written and directed by R Balki. And now he’s gearing up for his third film, Atrangi Re, which is again an Aanand L Rai film.

From experimenting numerous roles in films to trying his hands in other areas in the world of showbiz, Dhanush has come a far way. The journey wasn’t easy but his efforts turned out to be fruitful. On the occasion of his birthday, we thank this Kollywood superstar for entertaining us with his mass films, songs and dance numbers. His contributions to the world of cinema will always be cherished. Happy Birthday, Dhanush!

(The above story first appeared on LatestLY on Jul 28, 2020 12:01 AM IST. For more news and updates on politics, world, sports, entertainment and lifestyle, log on to our website latestly.com).