Dhanush’s Jagame Thandhiram is currently streaming on Netflix. The gangster flick has garnered a mixed respone from fans. Have a look! 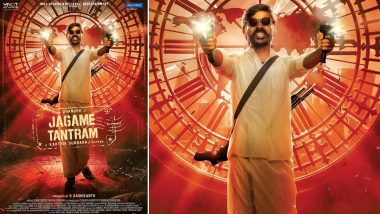 Dhanush's much-awaited film Jagame Thandhiram was released on Netflix today (June 18). The gangster movie is helmed by Karthik Subbaraj and stars Game of Thrones actor James Cosmo, Aishwarya Lekshmi as the female lead, Joju George, Kalaiyarasan in key roles. As soon as the film was released on the OTT platform, early reviews of fans were out on Twitter. The film has gotten mixed response whereas some have lauded it and others have tagged it average. Read on. Jagame Thandhiram Movie Review: Dhanush’s Gangsta Swag Is Lost in Karthik Subbaraj’s Unapologetically Flawed Netflix Saga (LatestLY Exclusive).

#JagamaeThandhiram Good message content but still could have been better. Not that impactful though. Dhanush is obviously a phenomenal actor but really not in that space to stand against James Cosmo. Jijo’s character still shall be explored. Overall, a 1 time watch.

Around 40mins. Slowly shifts to a serious tone👌 Very good graph maintained in screenplay so far. Expecting to touch full on terror mode during interval & second half. #JagameThandhiramOnNetflix #JagameThandhiram #Suruli

Just finished watching #JagameThandhiram easily the best movie of Karthik Subburaj 👌Dhanush is so effortless and Suruli role is a walk in the park to him. Sanotsh Narayanan's score alone deserved a theatrical release of the film. pic.twitter.com/JhdwLibZSs

Dhanush has delivered two classic gangster films #Pudhupettai and #VadaChennai. Karthik Subbaraj has also made notable works in this space but #JagamaeThandhiram ends up as the weakest work of them in the gangster genre!

(The above story first appeared on LatestLY on Jun 18, 2021 05:15 PM IST. For more news and updates on politics, world, sports, entertainment and lifestyle, log on to our website latestly.com).