KJ Yesudas Birthday Special: 10 Tough Songs Sung by the Legendary Gaana Gandharvan That We Can Never Get Tired Listening To! (LatestLY Exclusive)

In 2021, Yesudas would complete 60 years in cinema, which would make his 81st birthday that falls on January 10 very, very special! So why not look back at his amazing discography and choose some songs that stand out for being tough, and yet the legend pulled it off as if it was a walk in the park? 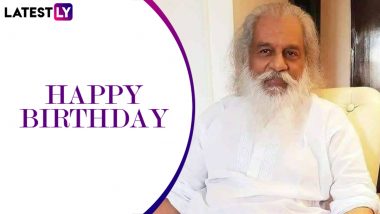 KJ Yesudas is a legend. Every Malayalam music lover swears by him, and for decades, there was nearly not a single album in Malayalam cinema that didn't feature a Yesudas song. Having made his debut in 1961 as a playback singer, he has sung over 50,000 songs in multiple languages, including Malayalam, Tamil, Telugu, Hindi, Kannada, as well as in Bengali, Odia, Arabic, English, and Russian! And yes, even in Latin too! Yesudas has won multiple honours in various states, apart from eight National Awards and also being conferred Padma Shri, Padma Bhushan and Padma Vibhushan. KJ Yesudas Birthday Special: 8 Melodious Hindi Songs of the Legendary Singer That You Need to Listen to Right Now!

Yesudas had also tried his hand at composing songs, and once upon a time, he had even tried his hand at acting! In 2021, he would complete 60 years in cinema, which would make his 81st birthday that falls on January 10 very, very special! So why not look back at his amazing discography and choose some songs that stand out for being tough, and yet the legend pulled it off as if it was a walk in the park?

Of course, It is a sacrilege to even confine the best songs crooned one of the finest singers India has ever seen within a double digit figure. But unlike the man with a beautiful voice that matches a gandharva (hence why Yesudas is called Gaana Gandharvan by his admirers), I am just human and I have my favourites, so on this wonderful occasion, here's us choosing 10 songs that stand out for being toughies for various reasons.

Starting this list with a Hindi song, because this one's really special, and yet unusual. Yesudas has supposedly given one of his best works in a Hindi film that never got released. However, a couple of songs made their way to the internet and his fans were just blown away. Especially this track. Story has it that the legendary composer, late Ravindra Jain was finding it nearly impossible to get a singer to sing this difficult track. But Yesudas sung it with such finesse, tackling the myriad of raagas with dexterity that, as the story goes, an impressed composer had claimed that if he ever gained eyesight, the one man he wanted to see was Dasettan! After listening to this song, we know why!

In this Padmarajan film, Nitish Bharadwaj was playing a gandharvan, and therefore his singing needs to be like that. And Yesudas' amazing dulcet tones makes this song so perfect that even our spirits raise to heaven every time I hear this song. Yesudas is the real gandharvan of our times!

Even though he is a born Christian, KJ Yesudas has sung so many Hindu devotional songs. But the song that is the most most famous and the most associated with him is singing the traditional Ayyappan lullaby song, that was originally written in 1923 (as per certain records) by Kumbakudi Kulathur Iyer. Listening to the track in Yesudas' voice somehow manages to transport the devotee to another plane and leaves him or her there in a peaceful mood. Another popular song associated with the singer is the "Rasoole Nin Kanivaale"  from the 1981 film Sanchari that praises Allah. In fact the song is even composed by Yesudas himself. He is surely an all-rounder! KS Chithra Birthday: 5 Best Songs Of This National Award-Winning Playback Singer!

This fantastic jugalbandi of classical raagas, that range from Hindolam to Chakravakam, is just another mere example of Yesudas' hold over music. And may I add, Mohanlal is the best actor to lip-sync to Yesudas' songs, second only to the late Prem Nazeer. The next song is a lovely example of our argument...

Yesudas won his sixth national award for this terrific semi-classical song. What makes this song so special is that apart from pulling off the most difficult aalap portions with ease, Yesudas also brilliantly conveys the anguish of the protagonist stuck in a terrible dilemma and guilt. Mohanlal also won a National Award for his performance in the film, and his act in the song could have cinched that. Onam 2020: 5 Famous Malayalam Songs aka Onapattukal to Celebrate Kerala’s Harvest Festival (Watch Videos).

How can we not have another classical song in this list, a genre of music that's difficult to even trained musicians, but Yesudas makes it sound like he has been singing raagas ever since he was born. In fact, he had won a National award for singing all the songs in this Manoj K Jayan starrer. A must listen for those who love classical music in films!

One of AR Rahman's earliest compositions, "Padakali" is an absolute blast of a track, as Mohanlal and the great Jagathy Sreekumar compete with each other in a singing competition. The fast-paced song is a difficult track to sing, not just for the pace but also because of the lyrics, while maintaining the inherent fun of the composition. But Yesudas and MG Sreekumar not only aced the singing part but also seemed to be quite enjoying it, giving us one of the most popular tracks of all time.

On the face of it, this looks like any romantic track among the many that Yesudas has sung in his illustrious career, though its soulfulness still makes it a lovely listen. What makes this song (and also a couple other in the film), composed by Ouseppachan, is that Yesudas modulated his voice for its leads, the two biggest superstars of Malayalam cinema - Mammootty and Mohanlal. The result is just terrific, as Yesudas competes with himself to see who gives the better singing effort and the winner, indubitably, is the listener. Juhi Chawla Birthday Special: Did You Know She Almost Romanced Shah Rukh Khan, Mammootty and Mohanlal in a Single Movie? This Picture Is Proof!

This State Award-winning track, composed by Raveendran in Abheri raaga, is another fun track that is difficult to sing because of its fast pace and classical connotations. Yesudas, like always, makes it sound like a child's play, easily switching between pace and melody and giving us a memorable golden track of all time!

The song and the preceding sequence are considered as one of the most iconic scenes in not just Mohanlal's career, but also in popular Malayalam cinema. The scene has Mohanlal's character prove that he is no novice when it comes to Hindustani music, as he shares some background of his painful past while giving a beautiful rendition in Sindhu Bhairavi, that Yesudas just knocks it out of the park. Especially the portion, "Madhumozhi Radhe... Ninne Thedi...", with the singer stretching the "Thedi..." so long without even losing any note! While we are at it, also check out the "Gange" track from Vadakkumnathan. Another masterful gem from the great singer!

(The above story first appeared on LatestLY on Jan 10, 2021 01:17 PM IST. For more news and updates on politics, world, sports, entertainment and lifestyle, log on to our website latestly.com).