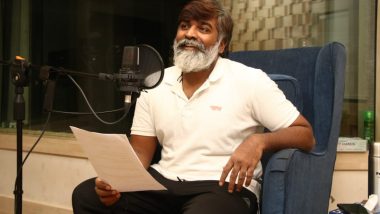 Considering the safety of the cast and crew, the makers of every films are completing the pending works. Talking about Vijay Sethupathi and Shruti Haasan’s film Laabam, it had gone on floors in April 2019. And this is the first time that the film’s lead pair would be working together. Directed by SP Jananathan, this film also features Kalaiarasan and Jagapathi Babu in key roles. A few pics of team Laabam has hit the internet. Vijay Sethupathi and a few others are seen completing the dubbing of the upcoming film. Vijay Sethupathi and Shruti Haasan Will Work Together for the First Time in SP Jananathan’s Next Laabam; Film Goes on Floors Today – View Pics.

Laabam is touted to be a big budget action film. The film’s music will be composed by D Imman whereas Ramji would be handling the cinematography. Fans are pretty excited about this upcoming movie as it will feature Vijay Sethupathi as a social activist. Moreover, fans are also thrilled to see Sethupathi and Shruti Haasan together in the same frame. Take a look at the pics of the dubbing unit: Tughlaq Durbar: New Stills Of Makkal Selvan Vijay Sethupathi From The Upcoming Political Thriller Hit The Internet!

Laabam is produced under the banners of 7Cs Entertainment and Vijay Sethupathi Productions. Reports are also rife that the streaming rights of Laabam has been acquired by the streaming giant Netflix. However, it is also said that the film will first hit the theatres and only after it will be released on the OTT platform. The makers are yet to announce the release date of Laabam.

(The above story first appeared on LatestLY on Jul 30, 2020 08:47 AM IST. For more news and updates on politics, world, sports, entertainment and lifestyle, log on to our website latestly.com).