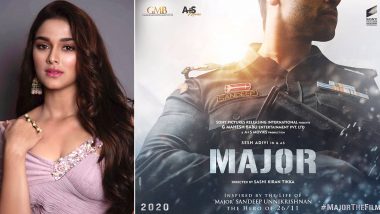 In February 2019, Tollywood actor Mahesh Babu had announced that he with Sony Pictures India would be producing the film titled Major that is based on the life of Major Sandeep Unnikrishnan, the hero of 26/11. The superstar had also shared that actor Adivi Sesh would be playing titular role and Sobhita Dhulipala would be seen playing a key role. It has now been confirmed that Saiee Manjrekar would also be seen playing a pivotal role in Major. 'Major' Actor Adivi Sesh Posts a Beautiful Note for Major Sandeep Unnikrishnan on the Anniversary of 26/11 Attacks.

Saiee Manjrekar had made her Bollywood debut with Salman Khan starrer Dabangg 3. And now she is all set to play a pivotal role in Major that is a Hindi-Telugu bilingual. Directed by Sashi Kiran Tikka, 50% of the film had been shot in Mumbai and Hyderabad before the lockdown was imposed. The rest of the schedule had to be stalled owing to the nationwide lockdown. Adivi Sesh to Lose 10 Kilos for MAJOR, Produced By Superstar Mahesh Babu.

Talking about bagging this opportunity, Saiee Manjrekar told Mirror, “I was looking for a character who would leave an impact on the overall narrative and at the same time, offer me an opportunity to explore myriad emotions as an actress. And that’s what the script of Major offers.” The film’s director Sashi Kiran Tikka about roping in Saiee for Major was quoted as saying, “Right casting is the base for good direction. When we watched her work in Dabangg 3, we knew she was the right choice.”

(The above story first appeared on LatestLY on Sep 24, 2020 09:05 AM IST. For more news and updates on politics, world, sports, entertainment and lifestyle, log on to our website latestly.com).