Prabhas’ Fans Kick-Off the Celebrations by Trending #5YearsForBaahubaliRoar and #Prabhas20FirstLook on Twitter! 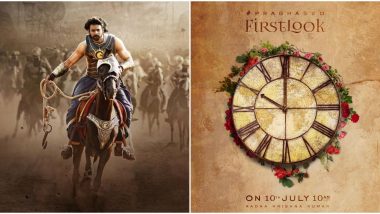 Fans of Prabhas have a double reason to call for celebration today! Both the reasons are extremely special. Five years ago, on this day, the magnum opus Baahubali: The Beginning, directed by SS Rajamouli, had hit the theatres. Yes, on July 10, 2015, Baahubali had released. Starring Prabhas, Rana Daggubati and Anushka Shetty in the lead, this movie shattered all box office records worldwide. Now today, July 10, 2020, the first look and title from Prabhas’ upcoming film, which is tentatively titled as Prabhas 20, will be released. Now how can this day be not special for all Prabhas’ fans? Prabhas 20: Fans Thrilled to See the Title and First Look of Baahubali Actor’s Next with Director Radha Krishna Kumar! (View Tweets).

Fans who are extremely excited to see the success of Baahubali: The Beginning and looking forward to Prabhas 20 first look, have been trending #5YearsForBaahubaliRoar and #Prabhas20FirstLook, respectively. The release of Prabhas’ first look from Radha Krishna Kumar’s film coinciding with Baahubali’s release, fans couldn’t stop from sharing their excitement on the micro-blogging site. Let’s take a look at the various tweets shared by Prabhas’ fans on Twitter. The Legendary Face-Off Between Prabhas As Baahubali and Rana Daggubati As Bhallaladeva Gets a COVID-19 Twist (Watch Video).

Can't Wait For It

Guys are you ready to rock if you are ready retweet with#Tag #Prabhas20FirstLook pic.twitter.com/akb1T7vack

The much earned ernest remaining aren't awards it's all about love showered at all corners of world that's what our #Prabhas ; the great lord Baahubali conqured in his reign.💥💥#Prabhas #Prabhas20FirstLookDay #5YearsForBaahubaliRoar pic.twitter.com/vQmVQwOZnK

How many of u r waiting for #Prabhas20FirstLook #5YearsForBaahubaliRoar pic.twitter.com/39WZRxubu8

Regarding the title and first look of Prabhas 20, it will be dropped online today at 10am. This upcoming flick features Pooja Hegde opposite superstar Prabhas. This upcoming that is touted to be a period drama is produced under the banners of T-Series and UV Creations.

(The above story first appeared on LatestLY on Jul 10, 2020 08:55 AM IST. For more news and updates on politics, world, sports, entertainment and lifestyle, log on to our website latestly.com).