Priya Anand will soon be seen in LKG and Kodathi Samaksham Balan Vakeel. 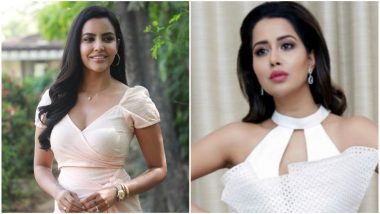 Actress Priya Anand has worked majorly in Tamil films. She has also appeared in many Telugu, Malayalam, Hindi and Kannada films as well. This week her two films - LKG and Kodathi Samaksham Balan Vakeel will be releasing. It is a Tamil and Malayalam film respectively. Amidst this it has been announced that the actress has been roped in Adithya Varma and replaced Razia Wilson. Varmaa Is Now Adithya Varma! Dhruv Vikram’s Debut Movie Gets a New Name, Cast, Director and Poster!

Adithya Varma has been in buzz ever since the film’s title has changed, new cast has been enrolled and a new director has been taken in. The film features Dhruv, son of Chiyaan Vikram, in the lead role. This film is a Tamil remake of the Telugu film, Arjun Reddy. The film was initially supposed to be directed by Bala but an official statement was released by the producer, E4 Entertainment stating that they are unhappy with Bala’s version of the film. That’s how Gireesaaya stepped in as the director. He is the one who worked as an assistant director under Sandeep Vanga for Arjun Reddy. NGK Teaser Out: Suriya’s Multiple Shades in This Political Drama Will Leave You Amazed (Watch Video).

The other actress who will be seen in the lead role in Adithya Varma is Banita Sandhu. This Bollywood actress has replaced Megha Chowdhury. The change in the film’s name (initially titled Varmaa) and the cast was announced by releasing a poster.

(The above story first appeared on LatestLY on Feb 20, 2019 09:18 AM IST. For more news and updates on politics, world, sports, entertainment and lifestyle, log on to our website latestly.com).