Sarkaru Vaari Paata: Kichcha Sudeep Reacts to Being a Part of Mahesh Babu's Next, Here's What He Has to Say

Is Kichcha Sudeep playing the role of an antagonist in Mahesh Babu's Sarkaru Vaari Paata? Here's what we know so far. 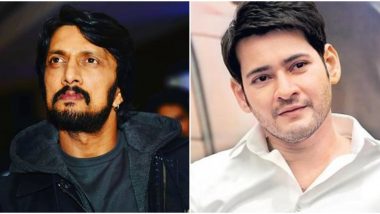 Mahesh Babu's next big release is Sarkaru Vaari Paata and the excitement for which is very high among his die-hard fans. While we know Mahanati actress Keerthy Suresh has been roped in as the leading actress and she later confirmed the same, there was a strong buzz around Kichcha Sudeep being a part of it as well. The actor will apparently play the main antagonist who will lock horns with the SPYder actor in this Parasuram directorial. While these were mere rumours, Sudeep has now reacted to the same and his revelation isn't really disappointing. Sarkaru Vaari Paata: Not Mahesh Babu But Allu Arjun was the First Choice for Parasuram's Next Directorial?

When Sudeep in his recent interaction with Bollywood Hungama was asked if he has signed his next with Mahesh Babu, the actor simply said, "No, nothing is confirmed as yet. Things are on the roll. It's better I confirm once it's done." Well, at least we know the actor is in talks with the makers and is waiting for things to get finalised. If all goes well, you'll indeed see Mahesh Babu and Kichcha Sudeep collaborating for one of the most discussed projects. Sarkaru Vaari Paata: Mahesh Babu Announces The Title Of His Film With Director Parasuram With This Intriguing Poster!

Check Out His Interaction

"The movie is called #Phantom. We've already finished one schedule. This was the continuous schedule but because of Covid-19 we had to shut down and the sets were already erected at Hyderabad": @KicchaSudeep #TalkingFilms #BollywoodHungama

Earlier it was being discussed that Parasuram was pretty impressed with Sudeep's performance in Salman Khan's last release, Dabangg 3 and hence decided to offer him the role of an antagonist. The director even narrated the script to the actor through a video call and the latter had liked his narration. Sarkaru Vaari Paata is touted to be a family entertainer and the shooting of which is expected to start by the end of 2020.

Stay tuned to Latestly for we may have an update on the film's casting very soon.

(The above story first appeared on LatestLY on Jul 08, 2020 09:25 PM IST. For more news and updates on politics, world, sports, entertainment and lifestyle, log on to our website latestly.com).