Vishnu Vishal Birthday: Here’s Looking At The Best Films Of The Tamil Actor You Must Watch Right Away! 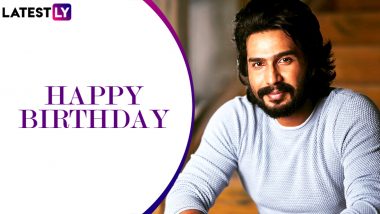 Before making debut in the world of cinema, Vishnu Vishal was in a totally different field. He was into cricket and also played for the Tamil Nadu Cricket Association. The handsome hunk, who holds a MBA in marketing from SRM Institute of Science and Technology, suffered a leg injury and that put an end to his cricket career. His interest in acting started after he began to watch films while he was bedridden due to the leg injury. And it was his uncle, who had played minor roles in a few films, who helped Vishnu enter the industry. Mohan Das Title Announcement Teaser: Vishnu Vishal's Next Looks Intriguing and Terrifying at the Same Time.

For the unversed, Vishnu was born as Vishal. He added the name Vishnu to his birth name while he entered the film industry. Vishnu is known for his works in the Tamil film industry. The actor who has turned 36 on July 17, 2020, had made his acting debut in 2009. On the occasion of Vishnu’s birthday, let’s take a look at his four best films that you must watch right away. Vishnu Vishal Is All Praises For Ratsasan Co-Star Amala Paul, Says ‘You Are The Best At Your Work’.

Vishnu had made his acting debut with this sports drama and it was also the directorial debut of Suseenthiran. This film was reportedly based on real life incidents. The director’s father was a kabaddi player and through this film he wanted to highlight the pain and insults his father went through.

Written and directed by Seenu Ramasamy, in this simple love story, Vishnu plays the role of a young lad who who is an alcoholic and a constant embarrassment to his hardworking adopted parents. Vishnu’s performance and the engaging narrative had won audiences hearts.

Ram Kumar’s film not only had opened to positive response, but was a huge hit at the box office as well. Starring Vishnu Vishal and Nandita Swetha in the lead, this comedy flick is set in a fictional village named Mundasupatti, where people are superstitious. The fear that if they are photographed, it might lead to their death. And Vishnu plays the character Gopi, a photographer from Sathyamangalam.

In this crime thriller, Vishnu Vishal who plays the character Arun Kumar, is seen as an aspiring filmmaker. But he gives up on his dreams owing to family pressure and with the help of his brother-in-law (played by Ramdoss), he becomes an Assistant Sub-Inspector, who heads on a mission to track down a serial killer.

These are some of the best films of Vishnu Vishal that you cannot afford to miss. Here’s wishing the handsome hunk a wonderful birthday and many more amazing projects in the future!

(The above story first appeared on LatestLY on Jul 17, 2020 08:15 AM IST. For more news and updates on politics, world, sports, entertainment and lifestyle, log on to our website latestly.com).