This week have some awesome and super exciting movie releases in silver screens across languages Hindi, Telugu, Tamil, Malayalam, English, Kannada and many more. Let's quickly take a complete look at the films releasing in the theatres this week. 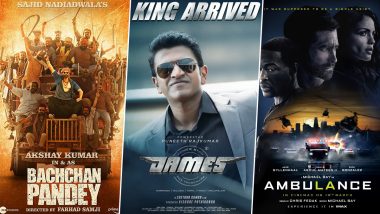 Theatres in all states are running with 100% capacity and with that we are moving towards the third week of March 2022. In the third week, there are several exciting releases on the occasion of Holi. This week have releases across languages like Hindi, Telugu, English, Kannada, Tamil, Malayalam, Marathi and many more. Talking about the biggest release of the week it would be Bachchhan Paandey, which is all set to release in theatres on March 18. The flick is the remake of 2014 Tamil film Jigarthanda. Helmed by Farhad Samji, the action-comedy stars Akshay Kumar, Kriti Sanon, Jacqueline Fernandez and Arshad Warsi in key roles. Bachchhan Paandey Trailer: Kriti Sanon, Arshad Warsi Gear Up To Make A Biopic On Akshay Kumar AKA Baghwa’s Gangster (Watch Video).

Another interesting release of the week would be James, the action-thriller will open in cinemas on March 17. Directed by Chethan Kumar, the flick stars Late Puneeth Rajkumar and Priya Anand in lead roles. The movie revolves around the life of James, manager of a security agency, who suddenly gets into the world of dark market. Another big release of the week would be Ambulance, which is all set to hit the theatres on March 18. The American action-thriller features Jake Gyllenhaal, Yahya Abdul-Mateen II and Eiza González, among others. The movie is based on the 2005 Danish film of the same name by Laurits Munch-Petersen and Lars Andreas Pedersen. James Teaser: Puneeth Rajkumar Shines As He Performs Thrilling Stunts for One Last Time (Watch Video).

(The above story first appeared on LatestLY on Mar 15, 2022 05:38 PM IST. For more news and updates on politics, world, sports, entertainment and lifestyle, log on to our website latestly.com).