Television actors Abhinav Shukla and Rubina Dilaik will be the celeb couple to participate in Bigg Boss 14, that's starting on October 3. Their real-life marital drama will definitely add much tadka to the new season, with other celebs being Jaan Kumar Sanu, the controversial godwoman Radhe Maa, Jasmin Bhasin, Eijaz Khan among others. 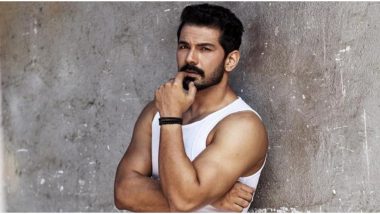 Television actors Abhinav Shukla and Rubina Dilaik will be the celeb couple to participate in Bigg Boss 14, that's starting on October 3. Their real-life marital drama will definitely add much tadka to the new season, with other celebs being Jaan Kumar Sanu, the controversial godwoman Radhe Maa, Jasmin Bhasin, Eijaz Khan among others. So what do you know about Abhinav Shukla? Let us share some of the information we have on this good-looking actor, who also tried his luck in Bollywood. Bigg Boss 14: Rubina Dilaik and Husband Abhinav Shukla’s Phonebooth Romance From the Grand Premiere Night Looks Sizzling Hot (Watch Video).

Punjabi by birth, Abhinav is actually an engineer, having completed Bachelor of Technology in Electronics & Communication Engineering from Lala Lajpat Rai Institute of Engineering and Technology. He had even won the Best Design Award at Tryst-2004, a tech festival held at IIT Delhi. So here we have a man who has good looks with great brains!

When it comes to Bollywood, according to Shukla's Wikipedia page, his movie debut was in the 2014 film Jai Ho, where BB14 host Salman Khan played the lead. However, we are not able to find any scene involving the actor. However, Shukla played the lead in the forest thriller, Roar: Tigers of the Sundarbans, that also had Nora Fatehi as one of the other leads.

Watch the Trailer of Roar: Tigers of the Sundarbans:

Shukla is also a rigid trekkie, even having a near fatal incident, when he got stuck on a ledge of a rock face and had to be rescued by a team of rock climbers.

As for his romantic life, Shukla married his longtime girlfriend Rubina on June 21, 2018. He had also directed a short film, Bareilly Ki Beti: The Youngest Survivor, that starred Rubina and was about female foeticide. Rubina Dilaik and Abhinav Shukla Keep The Spark Alive; Shoot For A Self-Made and Self-Composed Music Video!

Check out some pics we procured from the actor's Insta profile:

A Shirtless Pic for the Female Fans!

More than the politics, the gossip, the success and money ... just give me the sunlight and the never ending horizon ! ..... Abhinav

With His Pet 'Mouse'!

During One of His Treks!

When its about to Rain and you find a natural rain shelter ! #bushlife #craghoppers #bushman

A Vacay Pic With His Better Half

When you are in subzero just stick around ! 👻❄️ @rubinadilaik

So do you think Abhinav Shukla will win Bigg Boss 14? Do you see him acting in a Salman Khan film sometime ahead in the future, as we have seen some of the past contestants do? Share your thoughts in the comments section below.

(The above story first appeared on LatestLY on Oct 03, 2020 10:21 PM IST. For more news and updates on politics, world, sports, entertainment and lifestyle, log on to our website latestly.com).