Beyhadh actress Jennifer Winget gave goosebumps to her fans by making an OTT debut with Code M in 2020. And on the occasion of Army Day today (Jan 15), the actress took to Instagram and announced season two of the show. Check out the video. 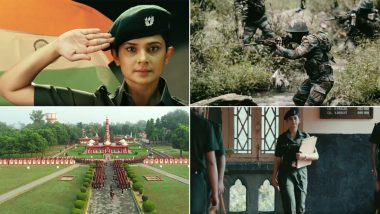 Beyhadh actress Jennifer Winget gave goosebumps to her fans by making an OTT  debut with Code M in 2020. On the show, she essayed the role of Major Monica Mehra and was loved by critics as well as the audience. Her raw and real avatar on this ALT Balaji and ZEE5 original packed a lot of punch. And on the occasion of Army Day today (Jan 15), the actress took to Instagram and announced season two of Code M. Yes, that's right! Along with a long message, she also posted a promo of Code M Season 2. Code M Review: Jennifer Winget As A Military Lawyer Is At Her Finest In Unmasking The Indian Army Secrets.

The video starts with an army parade, which is then followed by fighting sequences. After the same, Winget makes an entry and talks about the bravery of Indian armymen and how they leave all things behind only to serve their country. She also gives a salute to all the people in the army. However, it is at the end, when she reveals that Monica Mehra is back and this time it is going to be like always 'country above family'. ALTBalaji & ZEE5 Announce Second Season of Code M at Juggernaut Productions’ Success Party.

As soon as Jennifer posted this video online, fans poured love and also commented on how they are waiting with bated breath for Code M 2. Having said that, even season one of the show was also launched on Army Day and the same strategy has been repeated this time too. We wish luck to the team. Stay tuned!

(The above story first appeared on LatestLY on Jan 15, 2021 04:33 PM IST. For more news and updates on politics, world, sports, entertainment and lifestyle, log on to our website latestly.com).