Anup Jalota and Jasleen Matharu were the popular contestants of Bigg Boss 12. In fact, they were one of the most talked about jodis of that season. 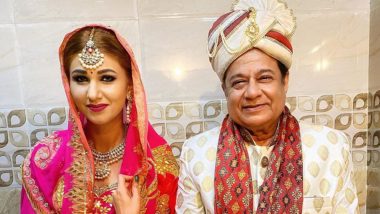 Anup Jalota and Jasleen Matharu were the popular contestants of Bigg Boss 12. In fact, they were one of the most talked about jodis of that season. Their unusual chemistry on the controversial reality television show often became talk of the town. The two have once again set the internet on fire and have grabbed netizens’ attention. We are talking about Anup Jalota and Jasleen Matharu’s wedding pictures, shared by the latter on Instagram. Anup Jalota Rubbishes Wedding Rumours With Jasleen Matharu, Says He Is 'Looking For A Suitable Match For Her'.

Jasleen Matharu has shared a series of wedding pictures of her along with Anup Jalota, who is seen as the bridegroom, and fans are wondering if they really tied the knot. But a source has revealed to TOI that two haven’t tied the knot in real. It is reportedly from the sets of their upcoming film Vo Meri Student Hai. If you remember, post Bigg Boss 12, the duo had claimed that the relationship between them was like of a guru-shishya (teacher-student). Bigg Boss 12 Contestants Jasleen Matharu and Anup Jalota Come Together for a Movie Vo Meri Student Hai.

Earlier in an interview with HT, Anup Jalota had stated, clarifying about his relationship status with Jasleen Matharu, “My marriage to Jasleen is news to me. I and her father are looking for a suitable match for her. I have suggested to them a Punjabi boy living in Canada. Nothing is fixed yet.” Then in July this year, Jasleen stated that she is dating Bhopal-based doctor Dr Abhijit Gupta and they were reportedly introduced by Anup Jalota. However, Jasleen and Abhijit’s romance was short-lived.

(The above story first appeared on LatestLY on Oct 09, 2020 03:01 PM IST. For more news and updates on politics, world, sports, entertainment and lifestyle, log on to our website latestly.com).