Karan Patel, who is an avid Bigg Boss viewer and also a friend of Jasmin's, has offered his 2 cents on the matter and by that, we mean bashed Rahul left-right and centre 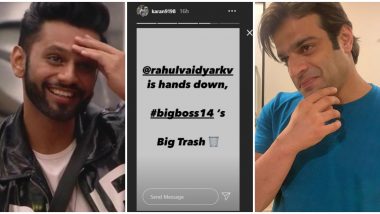 The recent captaincy task of Bigg Boss 14 did not go as planned after Jasmin Bhasin got crazy mad at Rahul Vaidya. During the task, Rahul tries to snatch the bag from Jasmin Bhasin but the lady does not let go. He then tells her to let go off the bag easily or else he will pull it with force and her injury will intensify. Jasmin does not like this attitude of Rahul and has a meltdown where she questions why men in general have this perception that women are physically weaker than them. Bigg Boss 14 October 27 Episode: Nikki Has No Feelings For Jaan, Jasmin Has A Meltdown - 5 Highlights of BB 14.

And while social media audiences of Bigg Boss 14 are divided on the Jasmin-Rahul issue, actor Karan Patel, who is an avid Bigg Boss viewer and also a friend of Jasmin's, has offered his 2 cents on the matter and by that, we mean bashed Rahul left-right and centre. Bigg Boss 14 Preview: Jasmin Bhasin Loses Her S**T On Rahul Vaidya and Says 'I Cannot be Part of This Show', Naina Singh Tells Him 'Banja Thoda Ladki Kya Pata Ache Se Khel Le' (Watch Video).

In a series of Instagram stories, Karan Patel criticised Rahul’s aggression during the task and called Rahul - Trash of Bigg Boss 14. Karan also encouraged Jasmin in his post and praised her.

Check Out Karan's Stories Below: 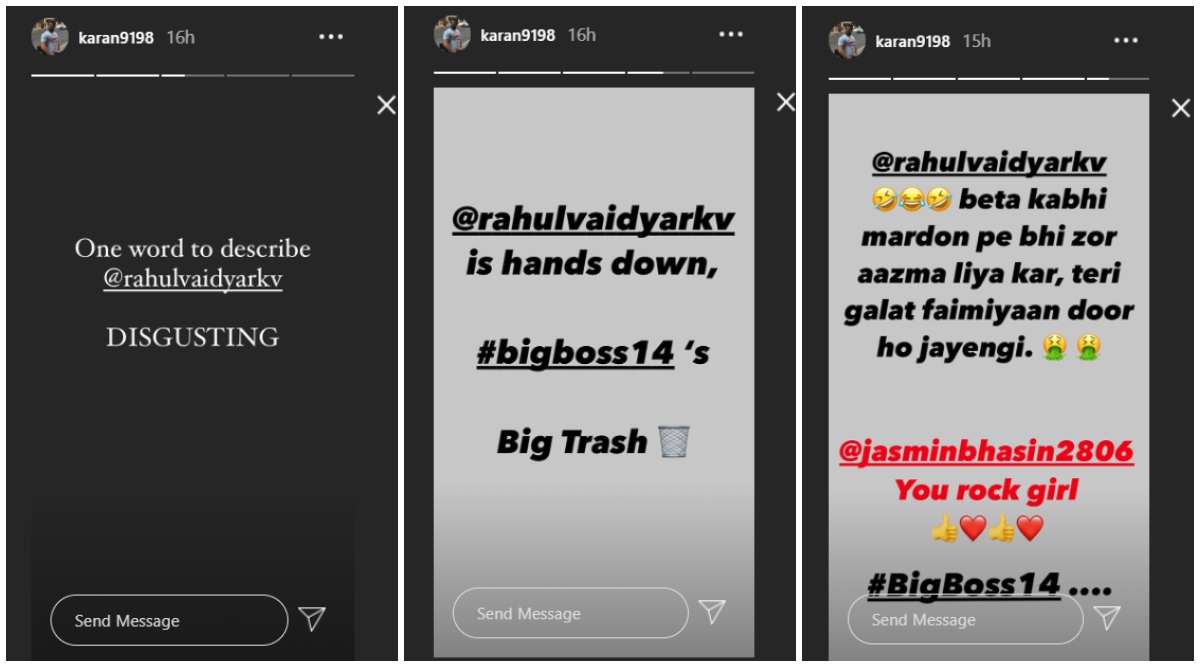 Karan has been an avid Bigg Boss viewer and in fact, has been invited on the show time and again where he has offered his perspective as a viewer to the housemates. In fact he also shares a warm relationship with BB host Salman Khan. The actor recently was seen in the Bigg Boss 14 house via video-conferencing where he and wife Ankita Bhargava came on to support their friend Shardul Pandit who entered the show this week as a wildcard.

(The above story first appeared on LatestLY on Oct 28, 2020 03:50 PM IST. For more news and updates on politics, world, sports, entertainment and lifestyle, log on to our website latestly.com).