Bigg Boss 14 is slowly and steadily giving fans all the required masala. As on yesterday’s episode, we saw Jasmin Bhasin as the new captain of the house And on tonight's episode, we saw the new luxury budget turning the ghar into two teams - the devils and the angels. Read on. 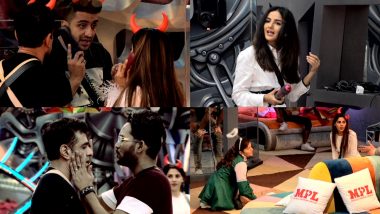 Bigg Boss 14 is slowly and steadily giving fans all the required masala. As on yesterday’s episode, we saw Jasmin Bhasin as the new captain of the house And on tonight's episode, we saw the new luxury budget turning the ghar into two teams - devils and the angels. And as expected the evils made all things problematic for all the angels. However, the highlight of the night was when one of the devils Eijaz Khan went overboard and made Jaan Kumar Sanu put his hands inside the toilet pot. We also get to see BFFs Aly Goni and Jasmin Bhasin arguing amid the task. Check out BB 14's highlights below. Bigg Boss 14 November 5 Episode: Jasmin Bhasin Becomes the New Captain; Rubina Dilaik Keeps Karwa Chauth Fast for Abhinav Shukla – 5 Highlights From BB14.

As Rubina Diliak is out of the red zone, it is Naina, Rahul and Shardul who are still surviving there. It so happens that in the morning, Singh yells at Rahul and Shardul for not helping her in the kitchen. She is the only one in the zone who knows how to cook, yet none of the two boys ask her if she needs little help. Shardul and Naina get into a heated argument over the same wherein we also see Pavitra Punia suggesting Naina to stop cooking.

Bigg Boss announces new luxury budget task where the house gets divided into two teams namely devils and the angels. Team devil consists of Aly Goni, Nikki Tamboli and Eijaz Khan vs team angel which includes Abhinav Shukla, Rubina Dilaik, Jaan Kumar Sanu and Pavitra Punia. The task was simple the devils had to torture the angels where the latter's patience was at test. FYI, the sanchalak of the task was Jasmin Bhasin.

The task starts with Nikki telling Rubina to ruin her favourite doll with the help of a fork, but angel Rubina acts and pretends she is dumb and is not understanding the orders. Up next, devil Eijaz Khan tortures Jaan Kumar Sanu by turning him into a dog and later on orders him to put his hand inside the commode. Well, surprisingly Jaan follows Eijaz's orders and then breaks down into tears.

The devil team talks to sanchalak Jasmin Bhasin on how she is not making the right decision as the angels are being dumb and hardly following the orders given to them. Amid this, Bhasin puts her point that she is being fair. Aly Goni on the other side of the mirror yells at Jasmin for not listening to him while he is talking to her. He also adds angrily that she is not getting the game/task.

Jasmin Bhasin declares the winning team and it was the devils. Bhasin while announcing the same looks a bit unsatisfied but considering the factor that the devils were at their best, she had to make the deserving team win the task.

That's it, guys! These are the top five highlights from the Bigg Boss night. Must say, even though some played the devil in the task, the reality can be that they were playing their real self. Let us see now how Weekend Ka Vaar with Salman Khan will look like. Stay tuned!

(The above story first appeared on LatestLY on Nov 07, 2020 12:06 AM IST. For more news and updates on politics, world, sports, entertainment and lifestyle, log on to our website latestly.com).