Bigg Boss 14: Sara Gurpal Wants to Give Bollywood a Shot After Coming Out of Salman Khan’s Reality Show

Bigg Boss 14 housemate Sara Gurpal confesses she is a big fan of show host and Bollywood superstar Salman Khan. In fact, she hints at extreme outcome if she ever gets work in a film with Salman. 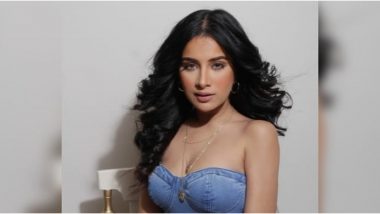 Bigg Boss 14 housemate Sara Gurpal confesses she is a big fan of show host and Bollywood superstar Salman Khan. In fact, she hints at extreme outcome if she ever gets work in a film with Salman. "If I ever do a movie with Salman Khan, then I will go mad," Sara told IANS. Punjabi singer Sara is proud of the work she has done back home. She says getting a break on a huge national platform as "Bigg Boss" is all thanks to her work in the Punjabi entertainment industry. Bigg Boss 14 Preview: Sara Gurpal Calls Nikki Tamboli a Bigot, Abhinav Shukla to Give up Immunity for Rubina Dilaik (Watch Video)

"It is because of Punjab I am where I am today. So, that will always be number one. People know me because I have worked in Punjab. 'Bigg Boss' happened because of that work," she said. Sara, however, has her plans in place after her stint in Punjab and on "Bigg Boss". "The third step is expected. I have never worked in Mumbai. I had once shot in Madh Island but I have never worked here. But there is always a way. Bigg Boss 14: Sara Gurpal’s Rumoured Husband Tushar Kumar Calls Her A ‘Mistake’, Reveals What Went Wrong in Their Marriage

If I get something after this (Bigg Boss), then of course, definitely (I will work in Mumbai). Who doesn't want to say, 'I tried for Bollywood'?" she said. "I have done a lot of work in Punjab, but here (Mumbai) there is an ocean (of work). You are like a fish in the sea and there you are a fish in the pond," she explained.

(The above story first appeared on LatestLY on Oct 09, 2020 11:25 AM IST. For more news and updates on politics, world, sports, entertainment and lifestyle, log on to our website latestly.com).