While we saw Rakhi and Rahul groove together, everyone was elated to see Arshi and Vikas bust a move. Everyone was looking their glamorous best. 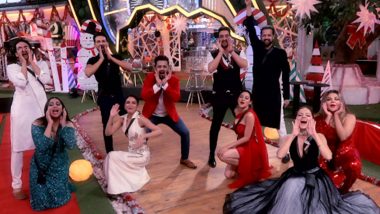 Bigg Boss 14's Weekend Ka Vaar is always an entertaining watch. Salman Khan interacts with the housemates and gives them a reality check to one of them. We often see contestants upsetting Salman with their behaviour and getting scolded by the actor. But today's; episode was all about having some fun. Salman who will be ringing in his birthday tomorrow was given a beautiful surprise by the BB contestants. They all danced for Salman and gave him an amazing tribute. Bigg Boss 14 December 17 Synopsis: Rahul Vaidya and Eijaz Khan Face Off Like Never Before.

All the contestants including Rubina Dalaik, Rakhi Sawant, Arshi Khan, Vikas Gupta, Rahul Mahajan, Abhinav Shukla, Eijaz Khan, Nikki Tamboli, Jasmin Bhasin, Rahul Vaidya, Aly Goni performed on Salman Khan's songs as a birthday gift. While we saw Rakhi and Rahul groove together, everyone was elated to see Arshi and Vikas bust a move. Everyone was looking their glamorous best as they welcomed Khan into the house. Salman was elated to see the dance performances and thanked everyone for their effort.

(The above story first appeared on LatestLY on Dec 26, 2020 09:56 PM IST. For more news and updates on politics, world, sports, entertainment and lifestyle, log on to our website latestly.com).