In the last episode of Weekend Ka Vaar, we saw Salman Khan schooling Rahul Vaidya for his Nepotism remark on Jaan Kumar Sanu, Rubina Dilaik for her 'Himsa' aandolan and Jasmin Bhasin for misunderstanding Rahul Vaidya's aggression during the task. And here's what happened in tonight's Weekend Ka Vaar episode. 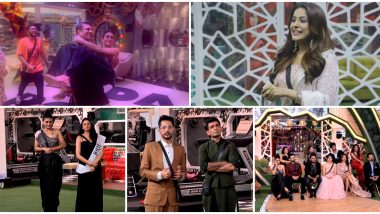 We have to admit that Weekend Ka Vaar episodes with Salman Khan are everyone's favourite times of the week. While contestants play their parts and games the entire week, Salman Khan comes and gives either his 2 cents or an earful to the contestants. In the last episode of Weekend Ka Vaar, we saw Salman Khan schooling Rahul Vaidya for his Nepotism remark on Jaan Kumar Sanu, Rubina Dilaik for her 'Himsa' aandolan and Jasmin Bhasin for misunderstanding Rahul Vaidya's aggression during the task. And here's what happened in tonight's Weekend Ka Vaar episode. Bigg Boss 14 Weekend Ka Vaar November 01, 2020 Synopsis: Shehnaaz Gill Sets Up A Date For Eijaz Khan and Pavitra Punia.

Salman Khan asks contestants to pick from Kavita and Eijaz over who is essential to the house and who is unessential. Abhinav, Jasmin Bhasin, Rubina and Nishant Singh Malkhani choose Eijaz as unessential, Naina Singh, Nikki Tamboli, Jaan, Rahul, Shardul and Pavitra pick Kavita as unessential. Kavita vents that she never knew Eijaz and has only met him thrice. She reveals that Eijaz approached her during the lockdown saying he was alone and depressed and hence she had helped him out. She also calls him crazy. Eijaz counters Kavita and they continue to argue and eventually irk Salman. The host clarifies that Eijaz was merely grateful to Kavita in the house as she had helped him. Pavitra calls Kavita's allegations cheap. Salman Khan calls out Kavita for disclosing Eijaz's personal issues on national television. Jasmin goes to calm Eijaz down but he gets worked up.

Bigg Boss 13 cutie Shehnaaz Gill enters the BB14 house and starts by flirting with Salman. We missed her too much man! Shehnaaz says she loves Eijaz. She also plays the 'Prem ka Game' where she brings Eijaz and Pavitra close and sends them on a romantic date. She also plays a compatibility game with Nikki Tamboli, Rahul and Jaan. Jaan clearly wins.

Salman Khan says that the eliminations will take place during the Monday episode. Nikki and Eijaz are seen talking about how the red zone members are not doing anything and are making faces looking at them. Kavita tells Bigg Boss that it is not fair that only her bad side towards Eijaz is shown and says she wants to go home. She decides that she will remain quite and sit in a corner and says only her bad side is being shown.

Meanwhile, Pavitra and Eijaz are called for their date by Bigg Boss and he carries her bridal style out into the garden area. They talk and flirt and have a good time. Eijaz tells Pavitra to not have expectations and the lady tells him that she has an attachment with him.

(The above story first appeared on LatestLY on Nov 01, 2020 10:58 PM IST. For more news and updates on politics, world, sports, entertainment and lifestyle, log on to our website latestly.com).